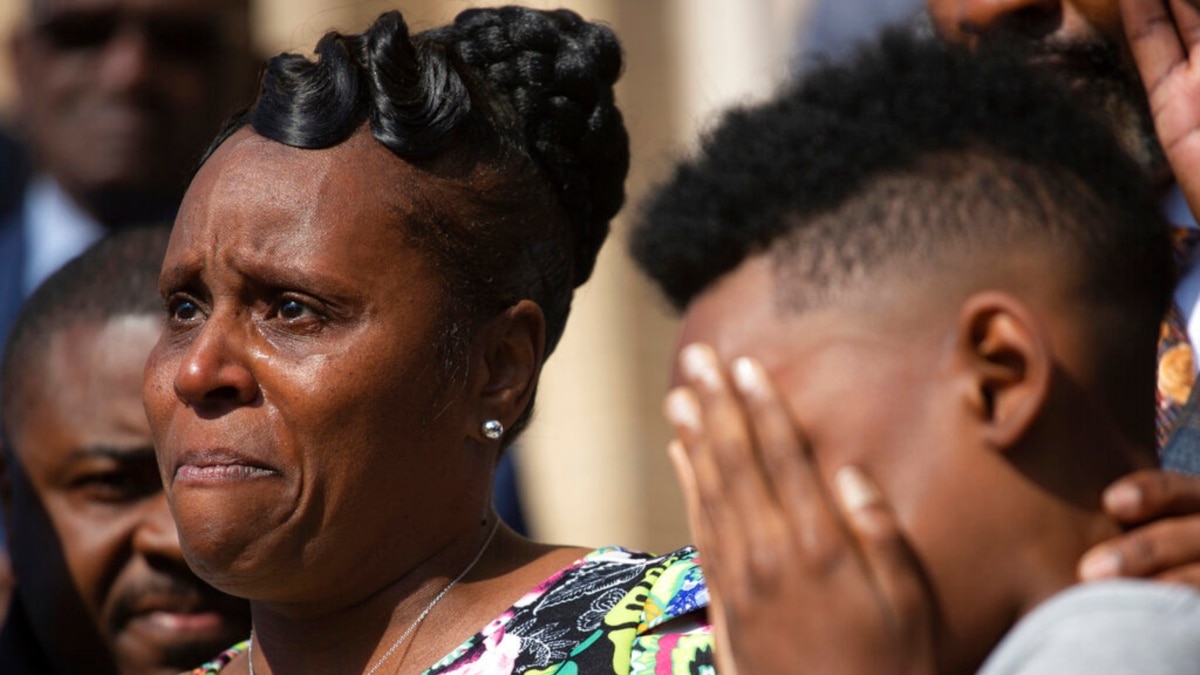 On Thursday, relatives of 10 black people killed in a Buffalo supermarket called on the nation to stand up and stop racist violence, their agony erupting in the tears of a 12-year-old child hours after a white man accused of murder silently faced murder charges .

Jacques “Jake” Patterson, who lost his father, covered his face with his hands when his mother spoke at a press conference. As soon as she finished, Jake fell into the arms of the Rev. Al Sharpton, a veteran civil rights defender, and wept silently, wiping away tears with his T-shirt.

“His heart is broken,” his mother, Tirza Patterson, said, adding that her son had trouble sleeping and eating.

“As a mother, what should I do to help him survive this?” she said.

Her ex-husband Hayward Patterson, a 67-year-old church deacon, was shot dead Saturday at the Tops Friendly Market. So was Robin Harris ’86-year-old mother and best friend, Ruth Whitfield, on the day they were due to go on a Broadway tour. Not too proud.

“This racist young man took my mother,” Harris said, shivering and stamping her feet as she spoke.

“How dare you!” Cried Harris.

Earlier in the day, in another part of the city, 18-year-old Peyton Hendron briefly appeared in court to hear that he had been charged with murder.

“Peyton, you’re a coward!” Shouted someone from the courthouse gallery as he was led away.

Hendron, whose lawyer pleaded not guilty in a previous court appearance, did not speak. His lawyers later declined to comment. He is in custody without bail and is due back in court on June 9.

Authorities are investigating allegations of hate crimes and terrorism against Hendron, who apparently detailed his plans for the attack and racist motivations in hundreds of pages of articles he posted online shortly before the shooting. It was broadcast live from a camera mounted on a helmet.

“We must bring to justice all those who promoted and supported hatred in this country,” Sharpton told a news conference near the Antioch Baptist Church in Buffalo. A group of civil rights activists, the National Action Network, plans to cover the funeral expenses.

The massacre at the Tops supermarket has caused alarm even in a country that is almost numb from the mass shootings. A total of 13 people were shot, all but two, Black. Hendron’s online writings say he planned the attack after he became fascinated with the ideology of white supremacy he encountered online.

“I’m constantly thinking about what could have been done,” Mark Tally told a family news conference, holding a photo of his murdered mother, 62-year-old Geraldine Telly. Her fiancé, who survived the shooting, saw her shot. Said her son.

Inaction against the threat of violence by supporters of white supremacy, Telly said, led to bloodshed last weekend.

“It’s like Groundhog Day. We have seen it again and again, ”he said.

Stephen Belongia, the FBI’s chief agent in Buffalo, said at the briefing that agents are still working to highlight Hendron’s motives and how he came to his extremist views. Investigators are studying online documents, including a personal diary on the Discord chat platform.

The diary says Hendron planned his attack secretly, without assistance. Half an hour before opening fire, he invited a small group of people to see his work, Discord said.

Fifteen Discord users took, according to a man familiar with the investigation, who had no right to speak publicly about it.

It was unclear how quickly these people saw what he wrote and whether anyone was trying to warn law enforcement.

“You need to expel these people,” he said at a briefing. “Expose those who spread such extreme views, and let’s eradicate them.”

There was another request at the family press conference in Tirza Patterson.

“I need the village to help me grow up and be here for my son,” she said, asking people to pray, “that God will give us the strength to go through this.”

“We are a village,” chanted civil rights lawyer Ben Crump, encouraging family members of other victims to join.

The law imposes an “obvious duty” on internet firms to develop services to prevent...

Scary moment: A skydiver falls to the ground and dies during a high school...