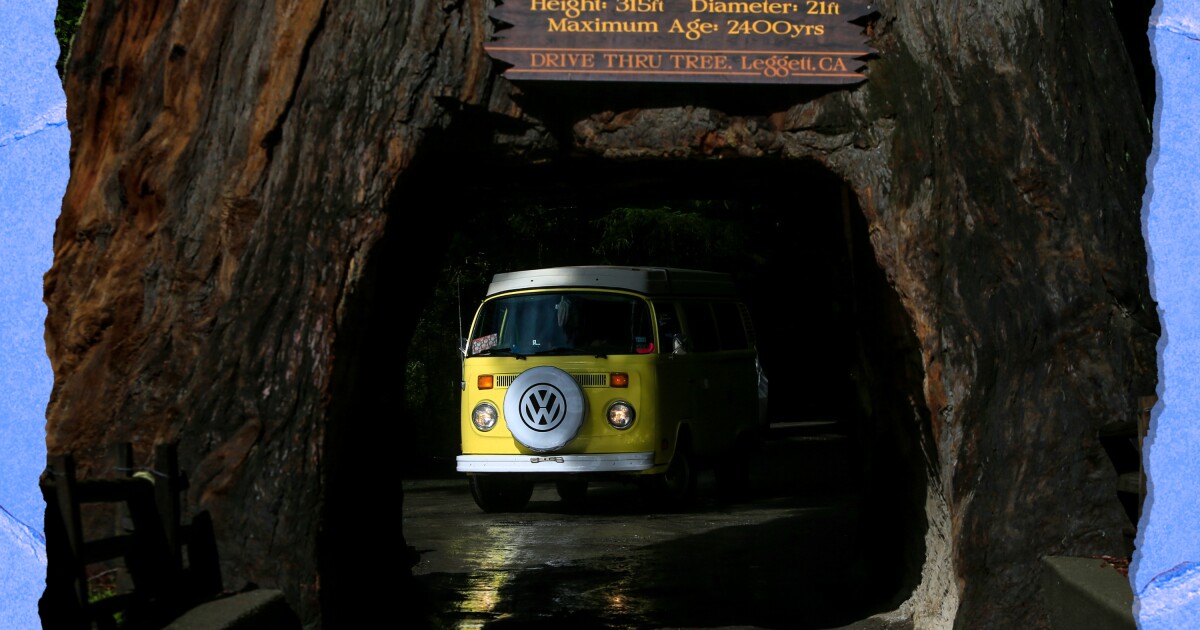 I’m not a fan of cutting holes in massive redwoods to make a little fun for tourists who want to drive through them. However, this roadside quirk began in the 1930s, and, incredibly, some trees still exist. Times writer Christopher Reynolds says that of California’s three private “tunnel trees” the 315-foot-tall chandelier at Leggett is the most beautiful. In fact, the tree was included in his list of the 101 best experiences in California.

“Since 1937, dizzy Californians have been driving their vehicles through this,” Reynolds wrote. “It makes him the star of private Underwood Park in sleepy little Leggett.” The tree is a coastal redwood (or Sequoia sempervirens) and costs $ 10 for an exciting trip. The other two standing tunnel trees are the Klamath Tour Thru Tree in Klamath and the Shrine Drive-Thru Tree in Myers Flat. Don’t confuse these living trees with the Pioneer Cabin Tree driveway in Calaveras Big Trees State Park, which overturned during a 2017 storm.

Of course, if you prefer your trees entirely (that would be me), Reynolds recommends visiting Giant Avenue, which runs parallel to Highway 101 through southern Humboldt County, about 75 miles north of Leggett. Fortunately, the practice of tunneling sequoias to entertain tourists is almost over, and logging is not. Read the rest of the must-see list for Reynolds, which includes many outdoor attractions such as Morro Rock in Morro Bay, Glass Beach in Fort Bragg and Mount Tamalpais in Marin County.

To join the list, we launched a collection of items: t-shirts, joggers, hats, bags, water bottles and other items created to celebrate life on the West Coast. The complete California collection is now available at the LA Times store.

Other lesser-known trees that, however, define who we are: a 200-year-old palm tree in Los Angeles that you’ve probably never noticed. It stands at the entrance to Figueroa Street in the exhibition park, near where the Banc of California Stadium is now (although the tree has been moved several times). Columnist Gustavo Arellano wrote in this story: “One of the oldest known living beings in Los Angeles is no longer silent. Earlier this week, I visited the fan palm to hear her wisdom about a subject he knows all too well: drought. ”

And writer David L. Ulin writes about the comfort he finds in the blue period of Los Angeles: the annual flowering of the jacaranda. “Like me, jacarandas are grafts,” Ulin wrote in the article. “Like me, they settled down. First brought to California in the 19th century, they were popularized by the efforts of botanist Kate Sessions, who introduced the state to more than 100 species of flora. In almost a century and a half, there are 20,000 jacarandas in Los Angeles alone. ”

Trees can be powerful symbols of who we are and teach us where we have been – a great trick not to go unnoticed.

3 things to do this week

1. Check out the upcoming exhibition of sculptures “Animal Nature” at Pepperdine University. Coyotes, sleek panthers and a group of deer landed on the sidewalks of Century City ten years ago, thanks to sculptor Gwyn Meryl. Brilliant bronze animals surprised passers-by – and added a little wildness to the cityscape. An exhibition of Meryl’s works will open at Pepperdine University to present early and recent works in wood, bronze, marble and clay. The artist writes on her website that she seeks to “achieve a balance between abstraction and realism.” The exhibition opens Saturday and runs through July 31 at the Frederick R. Weissman Museum of Art, Pepperdine University, 24255 Pacific Coast Highway. Admission is free; the museum is open from 11 a.m. to 5 p.m. Tuesday through Sunday. More information here.

2. Celebrate the month of heritage of the inhabitants of the Asian American and Pacific islands in the mountains of Santa Monica. The National Parks Service pays tribute to the various traditions of Asian American and Indigenous Hawaiian / Pacific Islanders at a free event at King Gillette Ranch in the Santa Monica Mountains. On Saturday from 10.00 to 14.00 there will be games on Taiko drums, processing of feathers and lei from Hawaii, calligraphy from Japan and China, as well as music. Need more ways to celebrate AAPI month? Here are 11 events in Los Angeles that celebrate the joy of the Asia-Pacific Heritage Month.

3. Rally to support Joshua trees as an endangered species. Currently, Joshua trees in the west are unprotected under endangered species laws. Although climate change is affecting shaggy desert dwellers, California biologists say the trees are safe. The Mahave Desert Trust believes otherwise. The nonprofit conservation organization invites the public to a rally at its headquarters in Joshua Three to listen to the director of conservation of the Center for Biological Diversity (who has petitioned for the listing of the western Joshua tree) and others advocating for Joshua trees. The California Fish and Game Commission is due to make a decision at its upcoming June meeting. The Land Trust says in a statement that Joshua trees are threatened by climate change as well as development, forest fires and other factors. The rally will take place from 5pm to 7pm on May 26 at Trust Headquarters, 60124 29 Palms Highway, Joshua Tree.

California has 279 state parks – and is now getting a new one. Next year you will be able to visit a 2,500-acre property on the Dos Rías Ranch at the confluence of the San Joaquin and Tuolumne Rivers in Stanislav County, 10 miles southwest of Modesto. “There’s access to both rivers, so you can fish as well as dive into the water,” California State Park Director Armando Quintero said in the story. “In a sense, it’s a walk into the past into a gentle valley. This is one of those places where people come and say, “Oh my God, that’s where I live.” That is my hope. ” Read the full story.

Be sure to read

Some people make ships in a bottle. Tom Cotmeyer of San Diego has bigger plans. The 76-year-old has almost finished a 33-foot copy of a Viking ship. “Now in the final stages of construction in the backyard of Vista, Kotmeyer’s wooden boat was inspired by the famous Hokstad ship, a veritable Viking rowing boat dug from an ancient mound in Norway in 1880,” the LA Times said in a statement. “Originally built around 750 AD, the Hokstad ship was a 78-foot wooden boat for 100 people in the style used for Viking raids.”

The mega-drought has already affected California and the West. Residents of SoCal will begin to feel more deeply oppressed, but how is this happening in the country of Kardashian? «[In] on the land of multimillion-dollar homes, the issue of water conservation is treated differently than in the areas where we live, ”the LA Times said in a statement. Learn more about how rich people cope with water constraints.

Last week’s lunar eclipse of the bloody moon yielded some fantastic photos. The picture above shows the moon over Mammoth Mountain. (By the way, Mammoth Mountain Ski Area has announced that it plans to stay open for skiing until June. Closing date not set.)

J. David Osorio, a physics teacher at Sun Valley Magnet School, sent me photos (like above) in which he took a bloody moon over Central Park in Santa Clarita.

Do you like this newsletter? Think about subscribing to the Los Angeles Times

Your support helps us report the most important news. Become a subscriber.

Send us your thoughts

Share everything you have in mind. The Wild is written for you and delivered free of charge to your inbox. Email us at TheWild@latimes.com.

Click to view the web version of this newsletter and share it with others, and subscribe to have it sent to your inbox every week. I. Mary Forgioneand I write The Wild. I have been exploring trails and open spaces in Southern California for four decades.

China is adding a science lab to its orbiting space station

Robinhood shares jumped 12% and stopped after the announcement that FTX may study the...

Taiwan’s Foxconn says it wants its customers to sell a lot of electric cars...