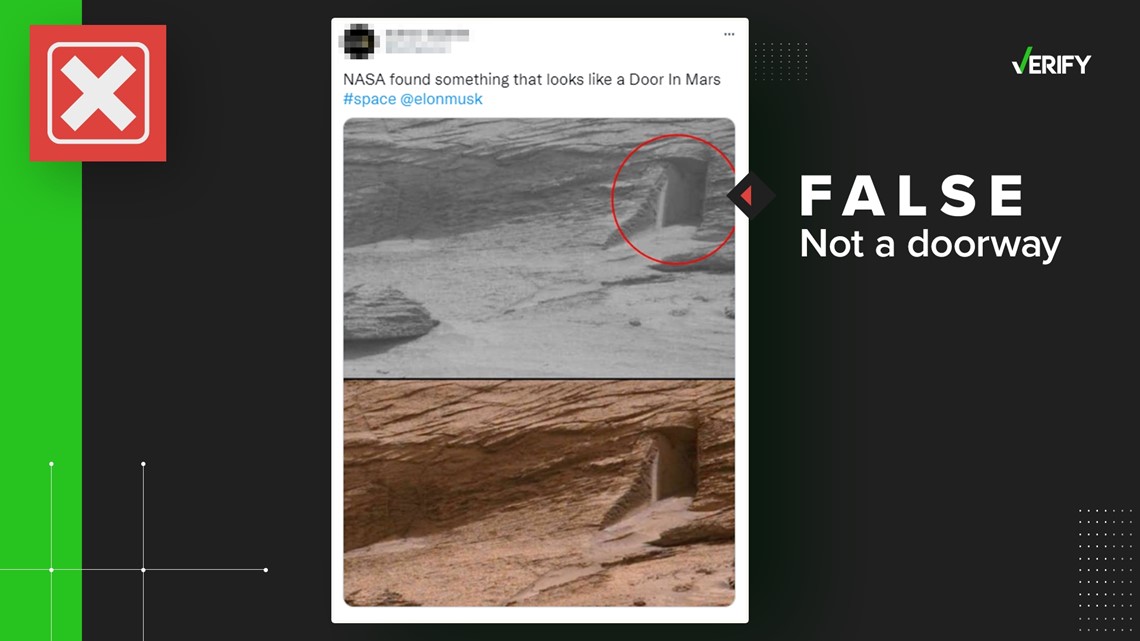 Some people on Twitter say NASA photos show a doorway on Mars. In fact it is a rock.

On May 7, NASA’s Curiosity rover took a picture of what appeared to be a doorway on the surface of Mars.

After the image was published, social media users asked if there was a real door on Mars, which would be a stunning discovery, since intelligent life has never been found on the planet.

NASA has found something like a door on Mars #space @elonmusk pic.twitter.com/57ZTd4MbBG

According to a tweet from the account of the NASA Curiosity rover, which is operated by NASA staff, there is no doorway on Mars.

“Some of you have noticed this picture I took on Mars. Sure, it may look like a tiny door, but it’s actually a natural geological feature! It may just * look * like a door because your mind is trying to make sense of the unknown, ”he said on Twitter.

Some of you have noticed this picture I took on Mars. Sure, it may look like a tiny door, but it’s actually a natural geological feature! It may just * look * like a door because your mind is trying to understand the unknown. (This is called “pareidolia”) https://t.co/TrtbwO7m46 pic.twitter.com/VdwNhBkN6J

NASA said the rock was found in the East Cliffs, particularly on Mount Sharpe. Mount Sharpe has open fractures that occur in nature, and the one that seems to be a doorway is about 12 inches high and 16 inches wide.

“These types of open faults are common in rocks, both on Earth and on Mars,” – said NASA. More photos taken by the rover from Mount Sharpe can be found here.

It is not uncommon for someone to mistakenly take a break for a door – a phenomenon that occurs when someone’s brain tries to “make sense of the unknown”, which is called pareidolia, said on Twitter. NASA said that “the human brain often tries to see familiar shapes that we can contact” – for example, when someone looks at the moon and sees “a man on the moon.”

Some of the tweets about the doorway photo NASA has questioned the timing of the photo release and the congressional hearing on unidentified flying objects.

Congress held a hearing on May 17 to discuss unidentified flying objects (UFOs). There is still no governmental confirmation of extraterrestrial life, and Congress has not discussed the doorway during the hearings.

Man stabbed during altercation at downtown intersection, suspect on the run, police say

Dozens of dead as a result of one of the strongest storms to hit...