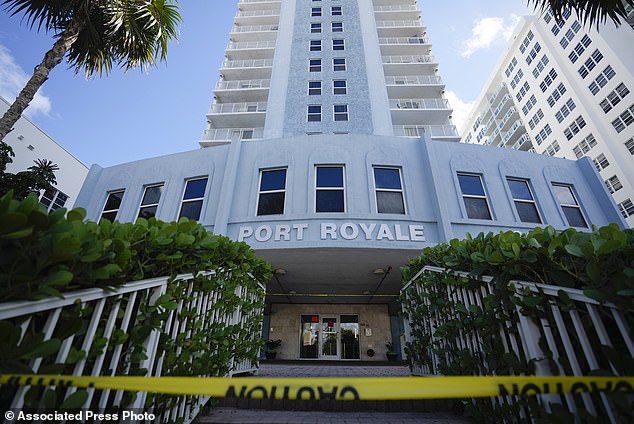 An evacuation order has abruptly forced out residents of a 14-story Miami Beach building on the same avenue where the Surfside condominium collapse killed nearly 100 people last year.

A structural engineering report prompted the evacuation of the 164-unit structure, which is in the process of undergoing a required recertification.

An engineer discovered that a main support beam identified for repair 10 months ago had shifted and that a crack in the beam had expanded, and other structural supports may need repair as well, the report said.

One resident, renovation contractor Marash Markaj, who lived in the building for more than six years, said the damage extends beyond a single support beam.

Caution tape blocks off the Port Royale building at 6969 Collins Ave, after it was ordered evacuated Thursday due to concerns over its structural safety, in Miami Beach 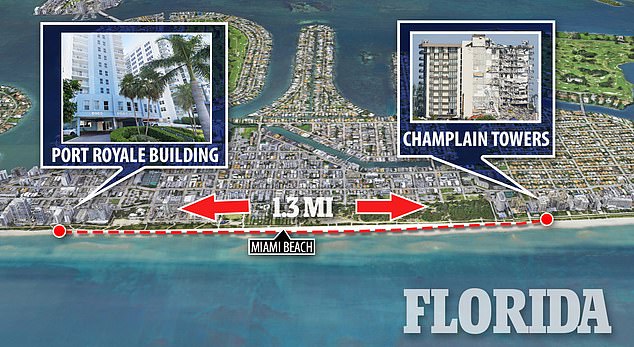 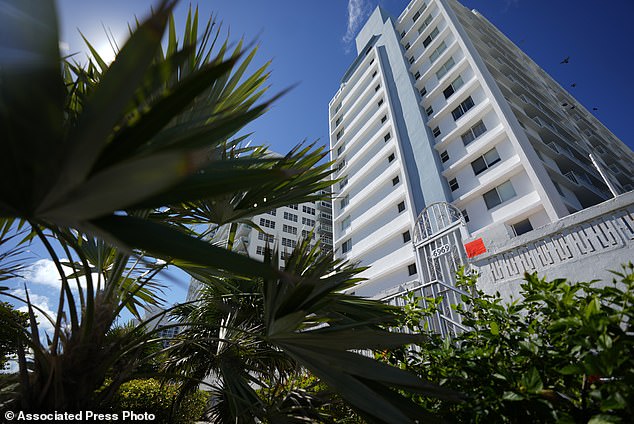 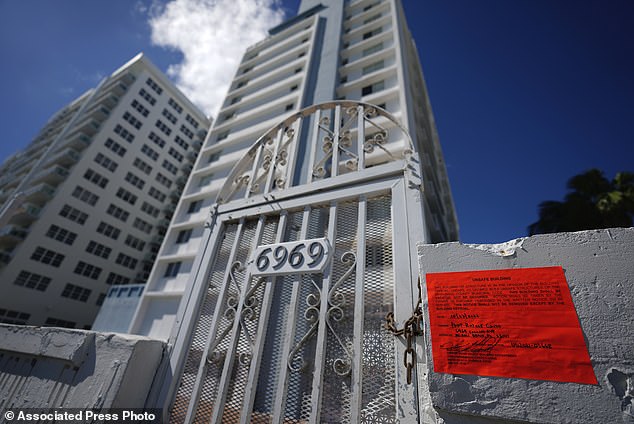 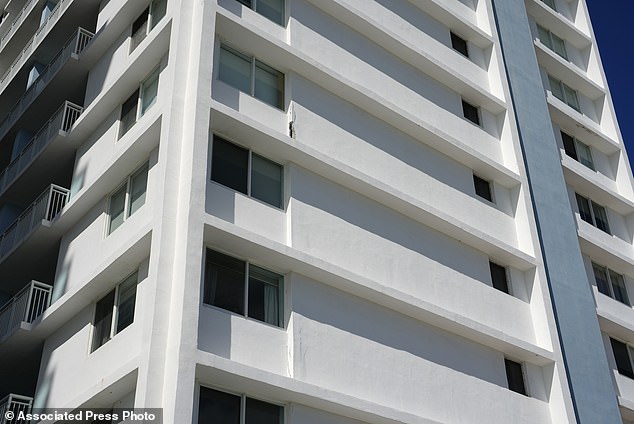 ‘I´ve seen the issues for many years,’ Markaj said.

He added that he tried to report the issues – including cracks in a column and water standing in the garage area for weeks at a time – to the building management and to the city´s building department.

‘I was never able to get a response,’ he said, adding that he was feeling ‘unsafe’ living in the building and with the way the building´s maintenance was handled.

Inspection Engineers Inc. said in a letter to the city that it’s working to obtain a city permit so that ‘comprehensive shoring’ can be installed within 10 days. That will be followed by another inspection of the building, which was constructed in 1971.

During an inspection about 10 months ago, engineers found ‘areas of concern that we designated as a priority to be repaired,’ Arshad Vioar said in an email sent to the Miami Beach Building Department. 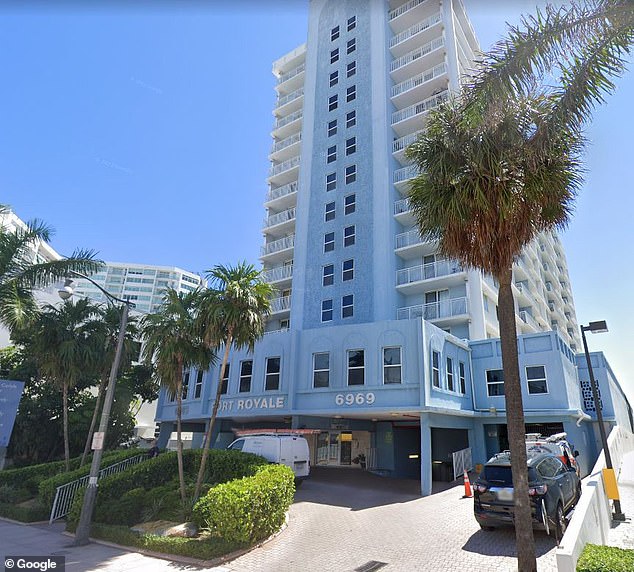 Inspection Engineers Inc. said in a letter to the city that it’s working to obtain a city permit so that ‘comprehensive shoring’ can be installed within 10 days. That will be followed by another inspection of the building, which was constructed in 1971 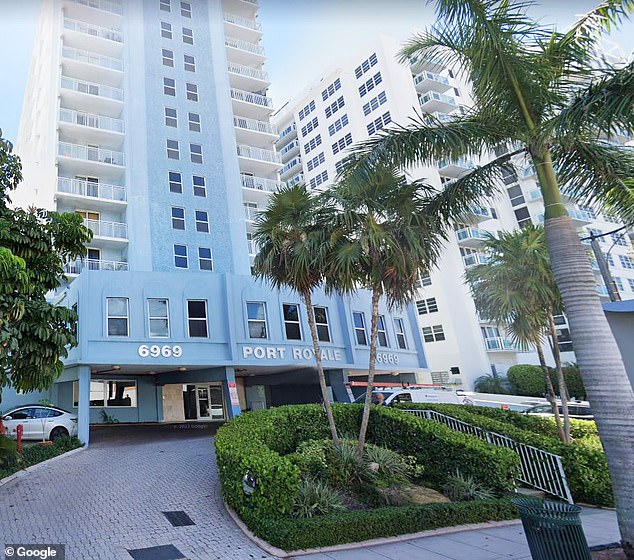 During an inspection about 10 months ago, engineers found ‘areas of concern that we designated as a priority to be repaired,’ Arshad Vioar said in an email sent to the Miami Beach Building Department

The building´s association selected a contractor and the repairs started about four weeks ago.

The firm that inspected the building was asked to supervise the work and this week ‘noticed that one of the main beams in the garage had experienced a structural deflection of approximately ½ inch and also the existing crack that was marked for repair had extended,’ Vioar said in the email.

The handful of condo residents who returned to the site Friday morning to see what was happening included Felicia Flores, 71, who lived in the building 15 years, and now has gone to stay with her daughter nearby. She swung by while walking her small dog.

She said work was being done on the building for a few weeks but that something changed Thursday.

‘It appears there was something more serious, so we had to leave all of a sudden,’ Flores said. 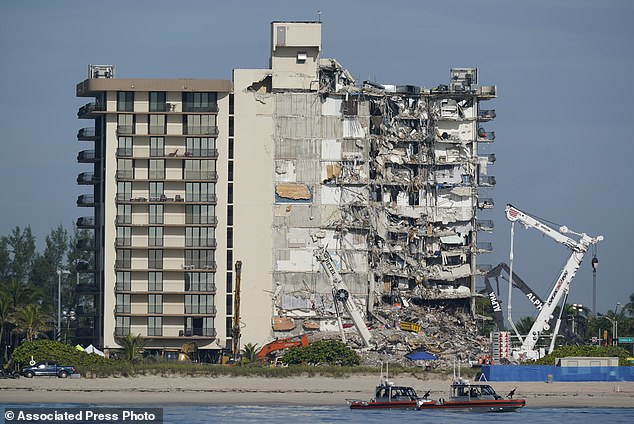 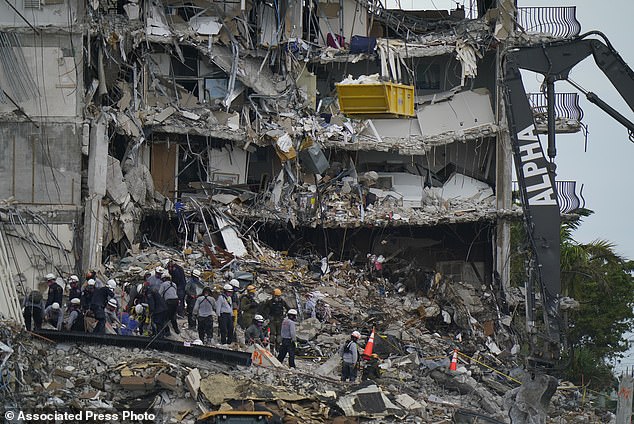 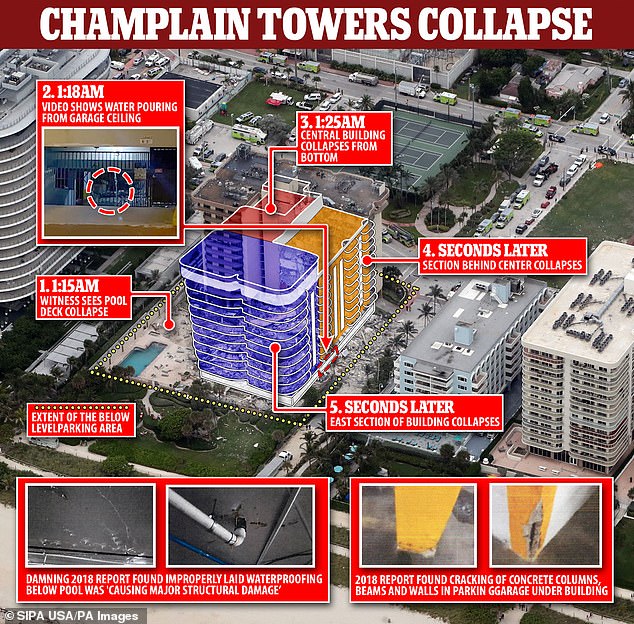 Miami Beach officials said condo owners who rented out their units were on the hook under local laws to cover temporary housing for renters for up to three months or until the building was habitable again.

Samy Bosch, who lived in building for nine years, said the residents were given very little time to move out. They were told at 5 p.m. Thursday that they had to be out by 7 p.m.

‘We don´t know exactly what´s going on inside there but we can´t stay. That´s it,’ Bosch said, as he returned on a scooter to observe the scene on Friday morning.

The Port Royale is about 1.3 miles south of the Champlain Towers South condo building in Surfside, Florida, also on Collins Avenue, where 98 people were killed in a June 2021 collapse.

The disaster at the 12-story oceanfront condo building in Surfside drew the largest non-hurricane emergency response in Florida history, including rescue crews from across the U.S. and as far away as Israel to help local teams search for victims. 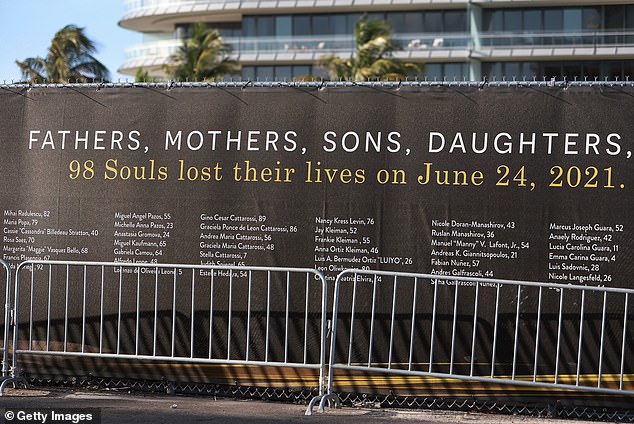 Family members of the dead listed on a screen surrounding the vacant lot where the 12-story building collapsed said they want answers from authorities. It may be another year before they get answers 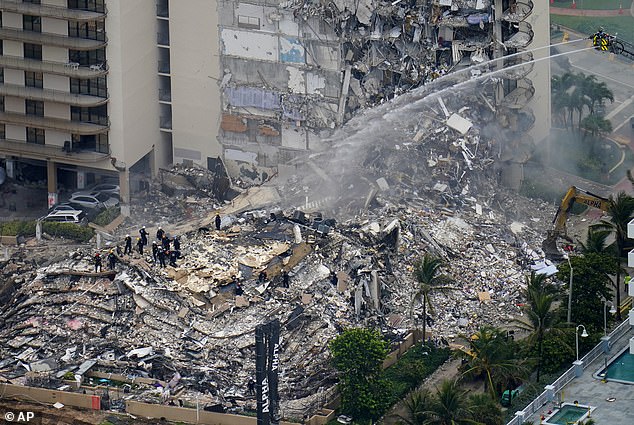 Other buildings in South Florida have been evacuated amid similar safety concerns since the Surfside collapse.

The disaster focused scrutiny on the structural integrity of aging condominium towers throughout Florida, especially along its coastlines, and the state has since moved to strengthen laws requiring inspections and periodic recertification of buildings.

New state rules signed into law in May require buildings to have their first recertification after 30 years, or 25 if they are within 3 miles of the coast, and then every 10 years thereafter.

A 2018 engineering report detailed cracked and degraded concrete support beams in the underground parking garage and other problems that would cost nearly $10million to fix.

The repairs did not happen, and the estimate grew to $15million in 2021 as the owners of the building’s 136 units and its governing condo board squabbled over the cost, especially after a Surfside town inspector told them the building was safe.

The 2018 engineering report found structural deficiencies that are now the focus of several inquiries, including a grand jury investigation.

A final conclusion on the cause is likely years away. The National Institute of Standards and Technology, which is leading the federal probe in to the collapse, recently said invasive testing will begin soon on samples of material from the collapse site. 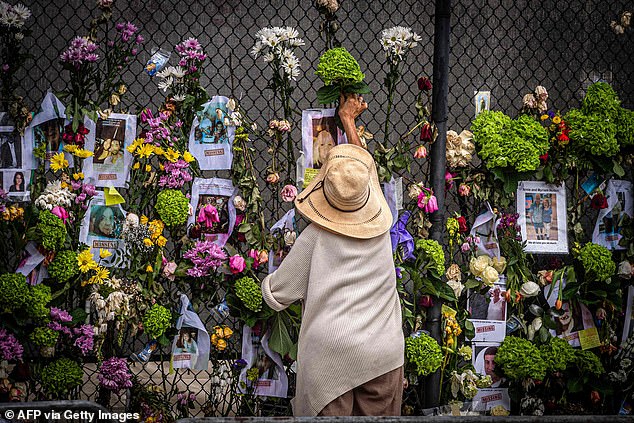 A woman adds flowers to the memorial on June 28 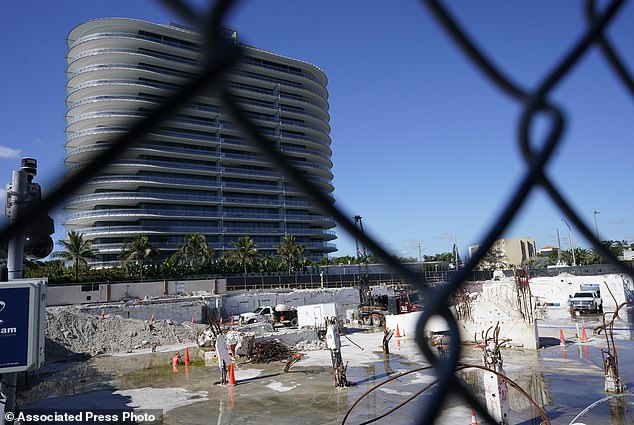 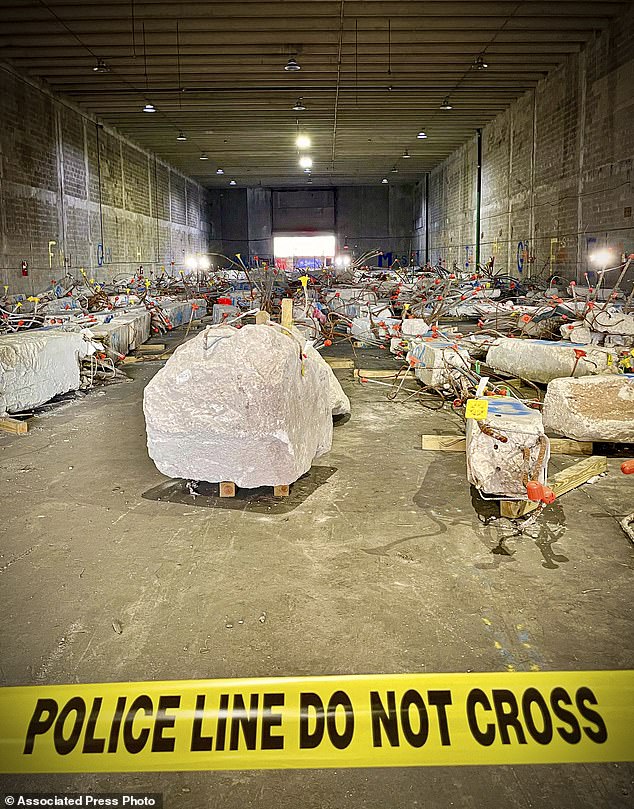 Physical evidence from both the collapsed and imploded sections of Champlain Towers South is stored in a secure warehouse in Miami-Dade County, where it has been cataloged and evaluated by members of the National Construction Safety Team investigating the June 24, 2021, collapse 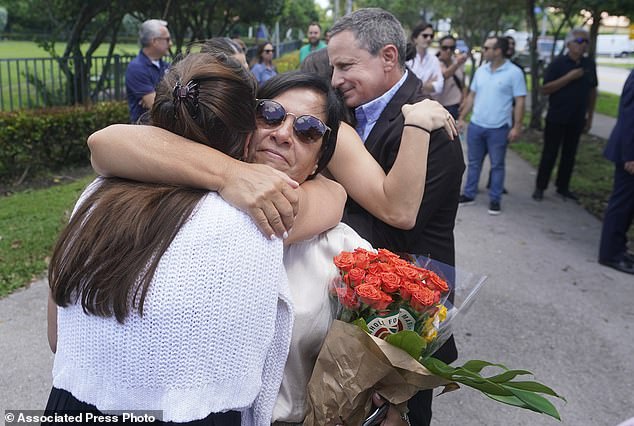 Andrea Langesfeld, center, and her husband Pablo, right rear, parents of Nicole ‘Nicky’ Langesfeld, who died in the Surfside, Fla., condo collapse, are hugged as they attend a ceremony to unveil a sign for ‘Nicky Langesfeld Place,’ Wednesday, June 22, 2022, in Doral, Fla. Langesfeld grew up in Doral before moving to Surfside 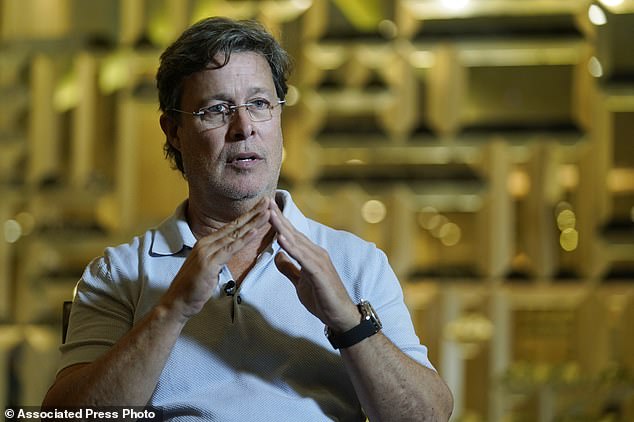 The tests will help investigators find potential flaws in structural elements of the building by looking into things such as density of the materials, how porous they were and if there was corrosion, NIST said.

The death toll in the Champlain Towers collapse ranks among the highest in U.S. history among similar disasters.

The 1981 Hyatt Regency walkway collapse killed 114 people and a Massachusetts mill disaster in 1860 killed between 88 and 145 workers.

The bottom of the stock market remains elusive, despite the deepening recession