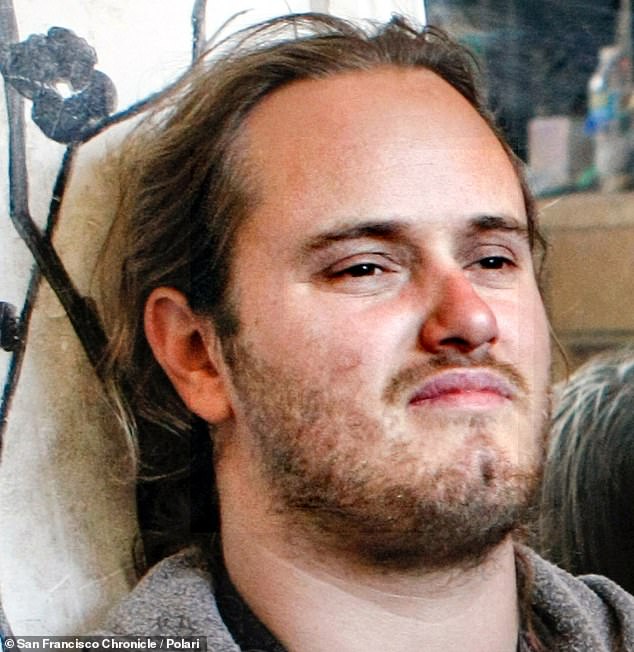 The man accused of breaking into House Speaker Nancy Pelosi’s home and beating her husband had previously shared his unhinged views in a series of blog posts.

David DePape, 42, ran the website frenlyfrens.com, where he discussed how he had an invisible fairy friend that sometimes appeared to him in the form of a bird and shared images of Hillary Clinton as a zombie.

During one post he even ranted about not being able to buy a fairy house with a working door.

Many of his posts were filled with tirades against Jewish people, black people, Democrats, the media and transgender people, under categories such as ‘Trannies,’ ‘Da Jewbs’ and ‘Great Reset.’

In just the past month alone, the Boston Globe reports, DePape had published hundreds of blog posts promoting far-right conspiracy theories before he allegedly broke into Pelosi’s San Francisco home on Friday and attacked her husband, Paul, with a hammer.

He is believed to have broken into the home around 2:30am, yelling: ‘Where’s Nancy?’ – a cry held on January 6 as rioters stormed the Capitol.

The 82-year-old is now continuing to recover at a local hospital, the House Speaker announced on Saturday, as she thanked well-wishers for their support and expressed how she is ‘heartbroken and traumatized by the life-threatening attack.’

DePape, meanwhile, faces attempted murder charges for the brutal assault. He is scheduled to be arraigned on Tuesday.

David DePape, 42, chronicled his far-right conspiracy theories on his website frenlyfrens.com before he allegedly attacked Paul Pelosi, 82, at his San Francisco home 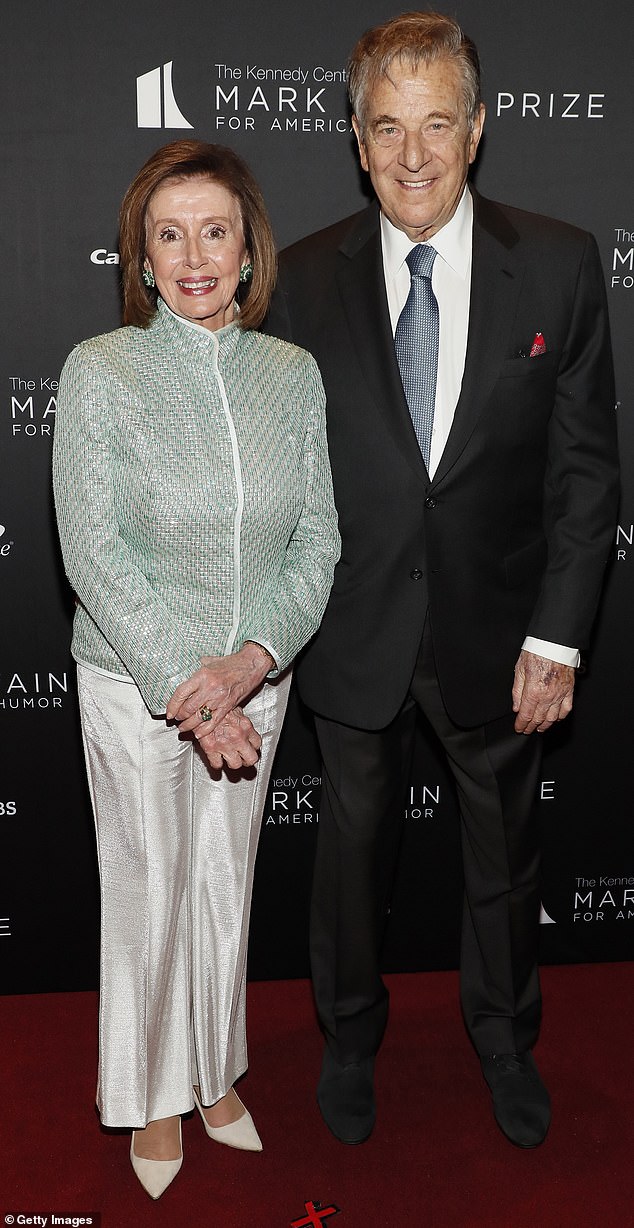 DePape is accused of breaking into the home Friday at around 2.30am yelling: ‘Where’s Nancy? before he attacked Paul Pelosi with a hammer. The House Speaker and her husband are pictured here in April

DePape registered the website in August, just a few months before the attack. It has since been taken down, but an archived version of its homepage is pictured 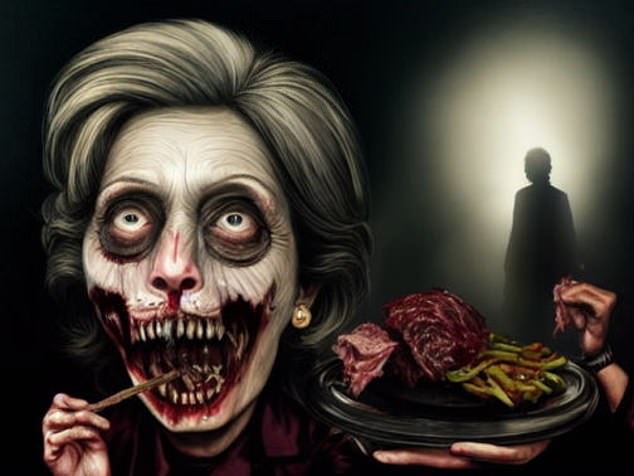 On the blog, he railed against Democrats and shared a picture of Hillary Clinton as a zombie

DePape had created his blog just months before the attack, registering it in August.

It included a video depicting a SWAT team firing at the magical nanny.

In the months since, he filled the blog with hundreds of posts depicting anti-Semitic and dystopian images.

One such post featured the Devil kneeling and asking a caricature off a Jewish person to tach him the arts of ‘lying, deception cheating and incitement.’

Several others contained images of rotting human flesh and blood, including zombified versions of Bill Gates and Hillary Clinton as he promoted his far-right conspiracy theories.

By late August, DePape seemed to become engrossed in Twitter’s decision to ban Jordan Peterson for his posts about transgender people after the Canadian psychologist compared being transgender to ‘satanic ritual abuse.’

DePape published six posts in support of Peterson, and then continued on his own tirade against transgender people — saying they should not be a protected group.

‘They were not BORN a freak,’ he wrote. ‘They are not INHERENTLY a freak threw [sic] no fault of their own… They are CHOOSING to be FREAKS.’

And when the Justice Department filed a motion to compel former Trump adviser Peter Navarro to return government emails, DePape posted there is ‘no evidence of election fraud.

‘Any journalist saying that should be dragged straight out into the street and shot.’

More recently, amid backlash to rapper Kanye West’s tweet declaring war on the Jewish people, DePape posted: ‘We are ALL the Jews’ slave race.

‘Now the Jew media wants you to GLORIFY the blacks who SOLD you into slavery,’ he wrote on October 19.

He also wrote that the Holocaust was a ‘Holohaux’ and said Nazis should have saved Zyklon B, a deadly gas, ‘so we an kill them with Zyklon B.’

In recent weeks, after Kanye West faced backlash for a tweet declaring war on the Jews, DePape shared his own anti-Semitic views on his blog

DePape was also active on 4chan, positing memes and debating other anonymous users about his beliefs.

In an October 24 post on the website, the Globe reports, DePape complained he was being targeted by law enforcement officials he described as ‘paid shills’ trying to manipulate the message board.

‘I would come in and lay out the facts, and so all the paid shills would jump on me,’ he wrote. ‘To try and suppress it.’

DePape would also share some photos from a construction site he worked at, one highlighting a jackhammer with the number 33 on it, an apparent reference to a conspiracy theory about Free Masons and world domination. 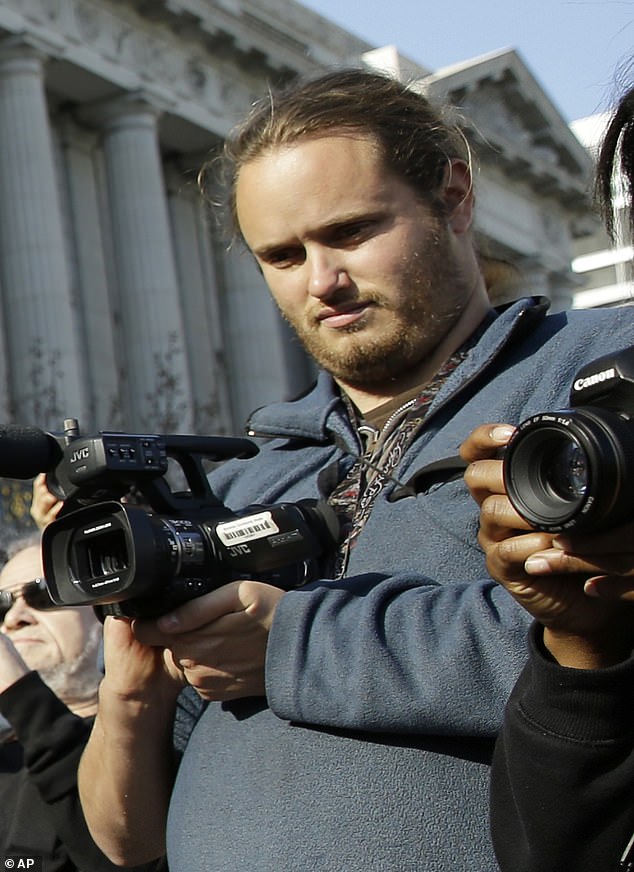 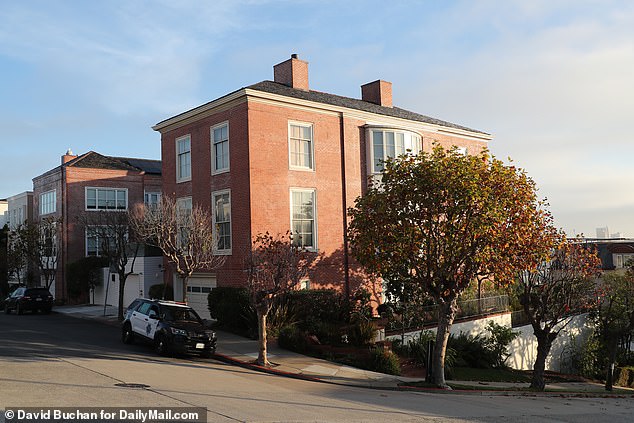 But other posts on his blog seemed to be more personal, offering a glance into his delusions.

DePape wrote in recent months how he was becoming suicidal as his relationship with Oxane ‘Gypsy’ Taub, 53, was falling apart.

‘I was extremely suicidal,’ he posted four days before the attack, writing in an apparent letter to Inti Gonzalez, who has identified DePape as her father: ‘Mentally I would beg you guys daily to let me kill myself.’

He wrote that he cut off contact with Taub and her children after he was kicked out of their home and started living in a car, though it is unclear when that was.

DePape also shared an image of a ‘fantasy miniature salamander’ he bought from Etsy, writing that he wanted to buy a fairy house as well — but was frustrated that all the ones offered on Etsy had fake doors.

‘They have lots of fairy houses, but NONE of them are MADE for fairies,’ he wrote.

And in a post on October 24, just four days before the attack, DePape shared images of a wooden birdhouse he purchased for an invisible fairy he befriended, that he said had begun interfering with his life.

‘He appears in a form that makes sense in my reality because I can’t see fairies,’ DePape wrote. ‘He’ll do things to let me know it’s him and he often appears as a bird.’ 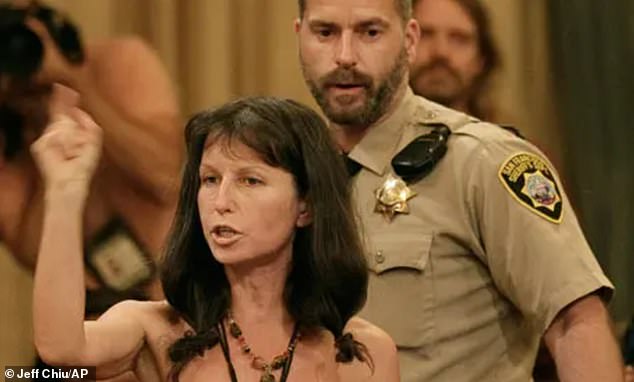 Oxane ‘Gypsy’ Taub, who once protested naked in front of San Francisco City Hall (above), was convicted in 2021 for child abuse after stalking and harassing a 14-year-old boy 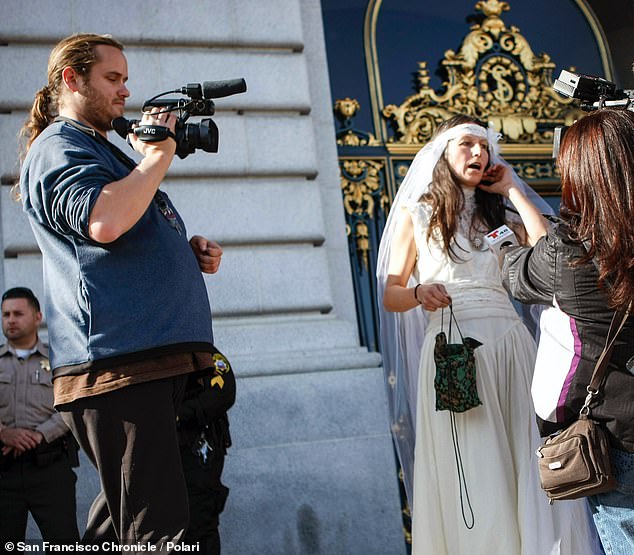 Taub (right, pictured with DePape in 2013) was accused of sending messages to a former friend of her son, telling the minor that she wanted to date him and trying to lure him to meet with her secretly

DePape has previously been accused by Gonzalez of sexually assaulting his three children when they were kids.

She wrote in a since-deleted blog post, how DePape slowly became ‘toxic’ until her mother, Taub, left him when she was 13-years-old

Her brother Nebosvod soon began to have memories of their father ‘physically and sexually abusing me and my brothers, which started when we were very young and continued until around 2008, when [Gonzalez] was 7.’

After Nebosvod began to remember abuse, Gonzalez says she and her youngest brother Daniel also started to remember being abused by DePape.

Their mother filed a police report against DePape but ‘the case was not managed properly so nothing was done about it,’ according to Gonzalez.

She wrote that her father’s alleged violent attack on Pelosi was ‘not much’ of a shock ‘considering the kind of extreme abuse he had inflicted on me and my brothers.’

But, Gonzalez also described DePape as a ‘quiet’ man who was ‘never violent, yelled or even swore.’

She said he was someone DePape who ‘did genuinely try to be a good person’ and added that she loves him, but ‘the monster in him was always too strong for him to be safe to be around,’ adding that he also suffered an abusive childhood.

Gonzalez said: ‘He barely opened up about himself or his past but it was obvious that he grew up in hell and that we didn’t know the worst of it.’ She did know, however, that his mother ‘would beat him almost to death.’

Gonzalez wrote that she still loves her father despite the ‘extreme abuse’ she recalls him inflicting.

He once even apologized for his behavior – according to Gonzalez, he took the siblings to a park and said he was sorry ‘for everything I have done to you guys. I am more sorry than you will ever know.’

However, the most recent time Gonzalez spoke to DePape, he tried to get to her to admit that the abuse never happened. 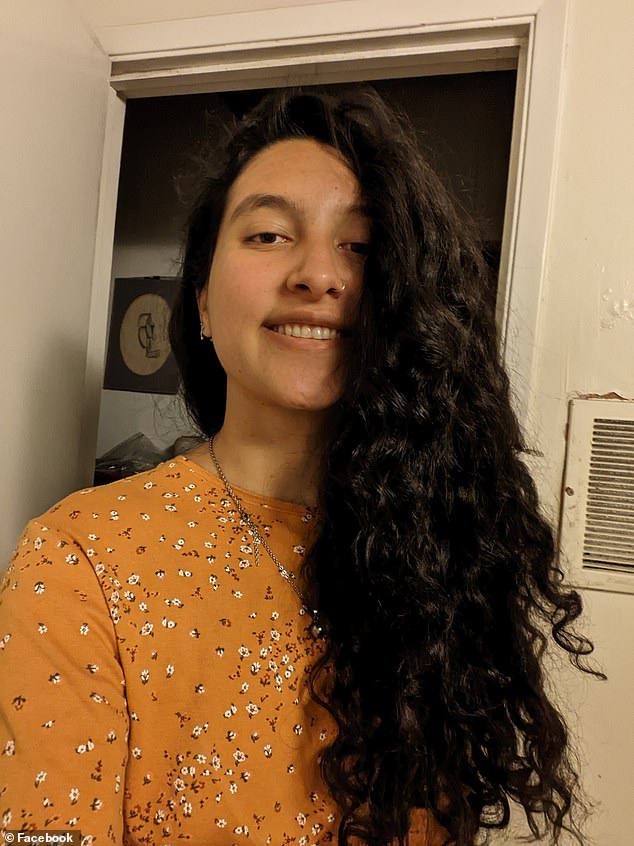 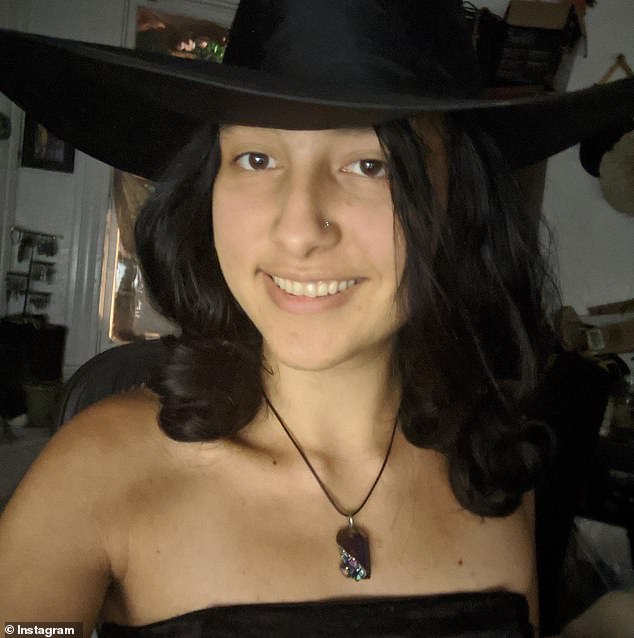 She wrote that her mother met DePape – whom she describes as her father – in Maui when she was pregnant with her and where Gonzalez was born. They moved to the Bay Area soon after her birth 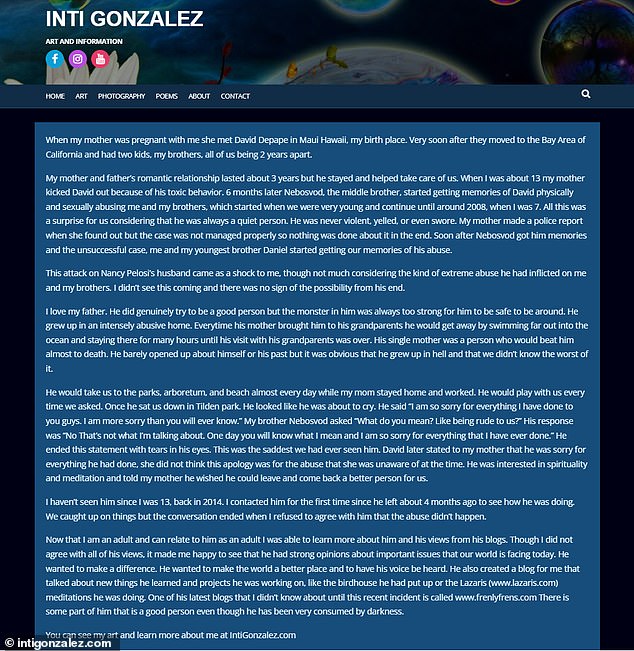 Gonzalez’s mother, meanwhile, had previously been convicted in 2021 for child abuse.

Prosecutors say Taub, 53,  who once protested naked in front of San Francisco City Hall, had been stalking a 14-year-old boy, sending him emails and messages and trying to lure him to secretly meet with her.

Police said she had an ‘obsession’ with the child, a friend of her son’s, once writing to him that it would legal for them to date in other states.

She once even allegedly drove past his house trying to talk to profess ‘her love and desire’ to be with him.

Authorities also claimed Taub had her son deliver a package to the boy, which included a letter pleading with him to meet with her without his phone.

‘This is our last chance to help you,’ the letter read. ‘Leave your bag and your regular cell phone in the locker.’

Police showed up at the time and place of the meeting Taub had set up and arrested her as she wore a ‘disguise.’

Along with stalking and endangering the boy, the court heard that he had suffered great ‘mental anguish’ over the repeated harassment. 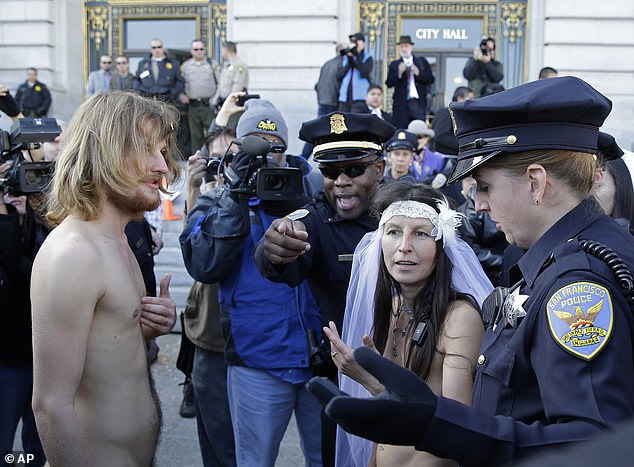 Taub, pictured at a naked wedding ceremony by San Francisco City Hall, was arrested in 2019 and convicted of her crimes against the 14-year-old boy in 2021 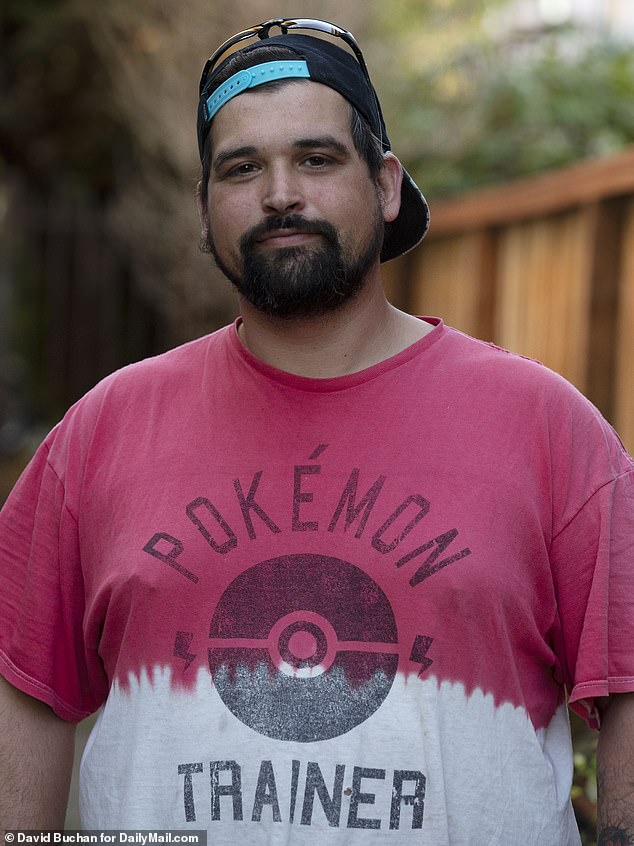 Neighbors like Ryan La Coste (above), claimed Taub and DePape would try selling psychedelic drugs to them as medicine. La Coste said he’s long complained about the nudity in front of minors from his neighbors

Meanwhile, neighbors have come forward in recent days to reveal they have long complained about the family’s behavior and nudity while minors were around, claiming to Michael Shellenberger’s Substack that the family keeps several sex dolls.

‘Before Gypsy got locked up, there were sex dolls drying on the back of their porch that I’m assuming she bought for her sons,’ La Coste said. ‘They’re off the wall.’

Along with worries over Taub’s criminal record, neighbors told Shellenberger that she and DePape often used the psychedelic drug ibogaine.

One neighbor, who identified herself only as Tish, claimed the duo would buy the drugs from Mexico ‘and then they bring it back here and treat people’s mental health illnesses.’

She alleged that Taub and DePape would abuse the pills themselves, wailing at night and sweating profusely from trips that appeared to last three days.

Laura Hayes, another neighbor, told CNN that she’s seen similar odd behavior from the former couple. She said DePape once told her ‘he talks to angels and there will be a hard time coming.’

While reports indicate that DePape was an unhinged, far-right conspiracy theorist, neighbors noted he and Taub’s politics were much more muddied.

They told Shellenberger that the couple had Black Live Matter flags and an LGBT rainbow flag outside their home, but also said that any liberal leanings appeared to be shallow and performative.

Tom Brady will return to the Buccaneers this week