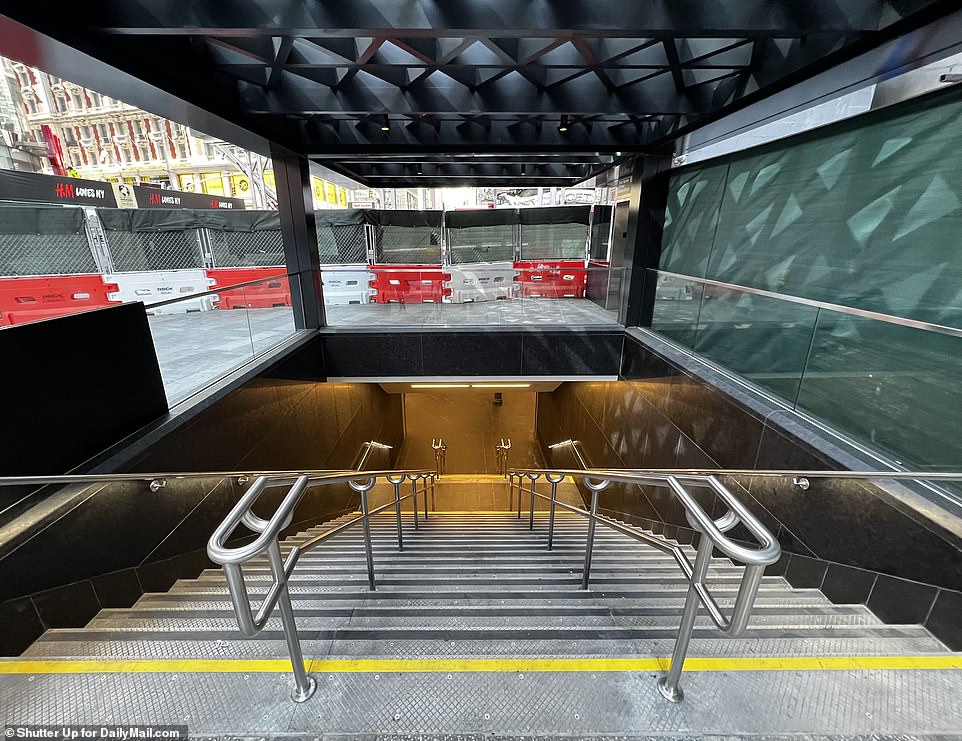 New Yorkers have hit out at the Metropolitan Transportation Authority (MTA) after it unveiled a $30million concrete subway staircase it deemed ‘stunning’ – while the decrepit and filthy subway system continues to struggle with crime at an all-time high.

The 28-step staircase, which works out at more than a million dollars per step, is at the busy Times Square station on 42nd Street in Manhattan’s Midtown. The stairs are 450 square feet bigger than its predecessor and is supposedly more ‘convenient’ due its central location.

MTA President of Construction and Development Jamie Torres-Singer boasted the unremarkable staircase was ‘stunning… first class’ and said the multi-million project came in ‘under-budget and on time.’

New Yorkers were less impressed and criticized the excessive amount of cash splashed on a single station when the century-old subway network is in desperate need of investment across the board.

They also mocked the ‘stunning’ staircase which looks remarkably similar to every other subway staircase in NYC.

Instead, commuters are demanding new train cars, more services, improved platforms and better cleaning and security are being demanded by commuters.

The latter is of keen importance as crime soared in the past two years to record levels in the city – with random attacks on the subway and people being pushed onto the tracks rising significantly. 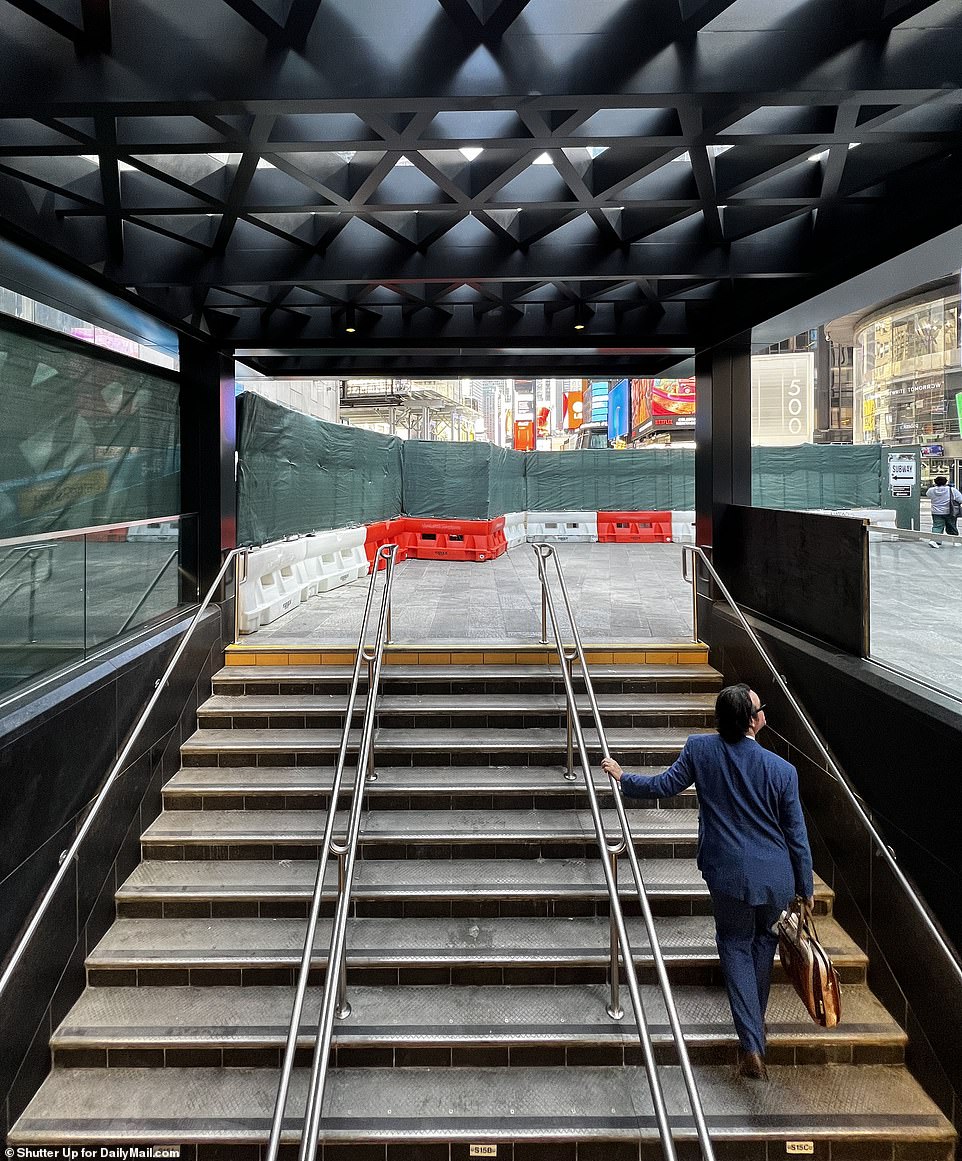 The MTA opened up a new subway entrance for Times Square costing $30 million on Wednesday near 42rd and Time Square. Transit officials opened the new stairway at the crossroads of the world in NYC 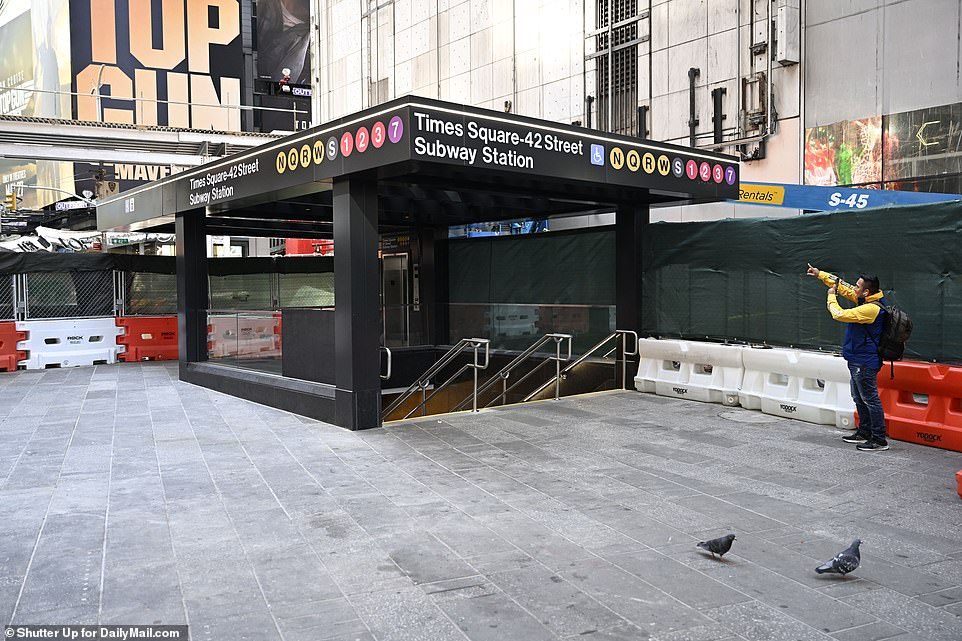 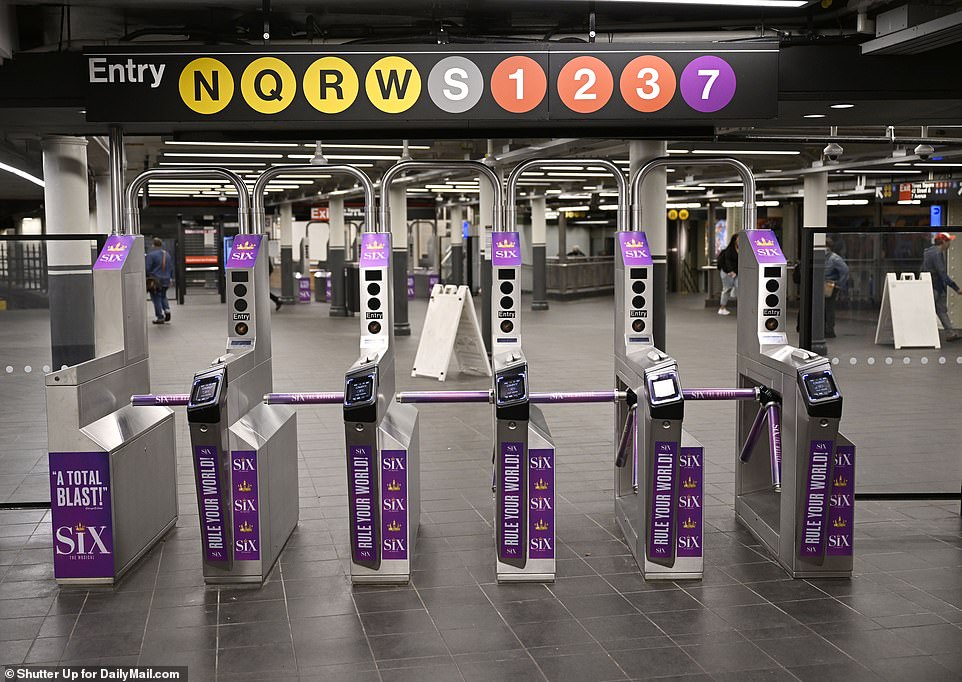 A new and much improved turnstile area full of purple advertisements, giving riders access to the N,Q,R,W,S,1,2,3 and 7 lines

‘MTA=Money Thrown  Away,’ Pete from Manhattan tweeted. ‘Why @NYCTSubway riders can’t have nice things, part infinity $30M for a staircase? Why not have a pair of escalators? Or an additional elevator? Clueless or shameless?’

‘Gonna have to go check out the MTA’s new $30 million staircase soon. I assume it’s handmade by artisans in a remote village in the Alps using literal gold,’ Second Ave. Sagas – an account dedicated to ‘Subways, transit, NYC. ‘The official account of what mayoral sources once called an obscure transportation blog’ – tweeted.

‘MTA spent $30 million to replace this Times Square subway staircase of 28 steps,’ Kristen Mag tweeted. ‘So that works out to $1,071,429 per each concrete step. I’m no civic engineer, but that seems…a bit much?’

‘F Trains eternally delayed and I can’t get home but at least we have that great $30 million staircase — great job MTA,’ media attorney Andrew Gerber tweeted.

‘It is stunning how the MTA which is always in deficit can spend $30 mil on a staircase, money that must come from hardworking taxpayers,’ Brooklyn resident Steven Ben wrote.

‘MTA spending $30 million on a staircase in Times Square so it can look pretty to tourists who don’t use it while the infrastructure and workflow sucks for people who live here and do use it while perpetually raising rates & not improving anything of real need & importance,’ Jo Molina Cabrera shared.

Crime has become a recurring theme on the subway under NYC Mayor Eric Adams’ first-year tenure. Transit crime has spiked 63.5 percent — with 325 more incidents compared to the same time period last year — from May 9 until May 15, according to the NYPD’s latest statistics.

Workday ridership on the subway is still approximately at 60 percent of what it was before the start of COVID in March of 2020 with 3.3 million riders using the system.

In April alone, the number of crimes in the subway jumped 46 percent, from the same period last year. There were 224 more crimes reported that month compared to last year.

January saw the biggest increase, nearly doubling the year before, with 198 crimes reported compared to 113 in the first month last year.

That was the month when Deloitte analyst Michelle Go was pushed to her death under a Times Square train by a homeless man with a history of mental illness.

A month later, on February 24, six people were stabbed in the system, and a city Health Department scientist Nina Rothschild, 58, was pushed down the stairs in a Queens subway station and beaten 13 times in the head with a hammer. 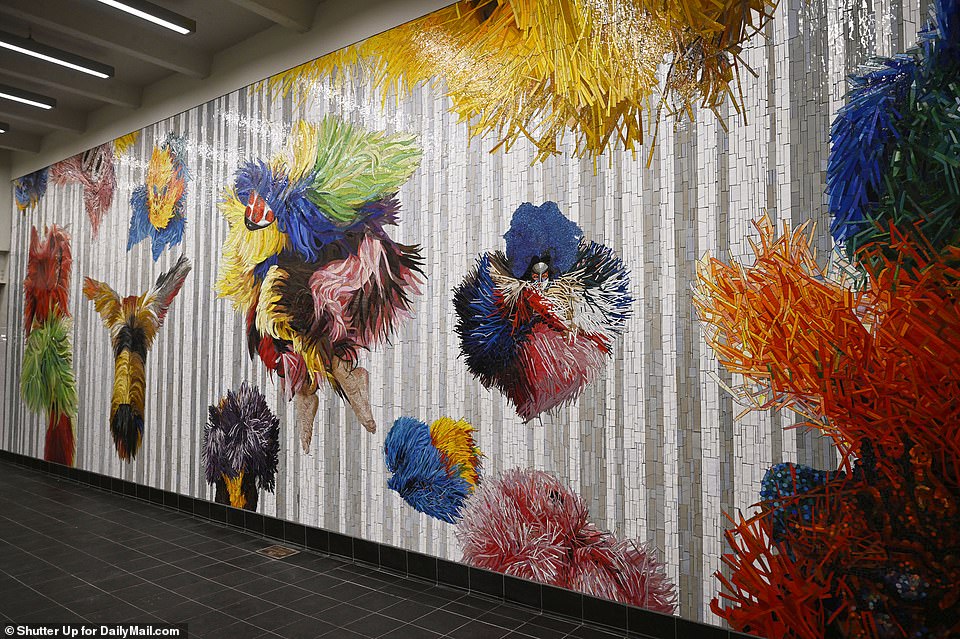 A 4,600-square foot street mosaic by Chicago-based artist Nick Cave was also part of the unveiling, giving New Yorkers a sense of art while commuting 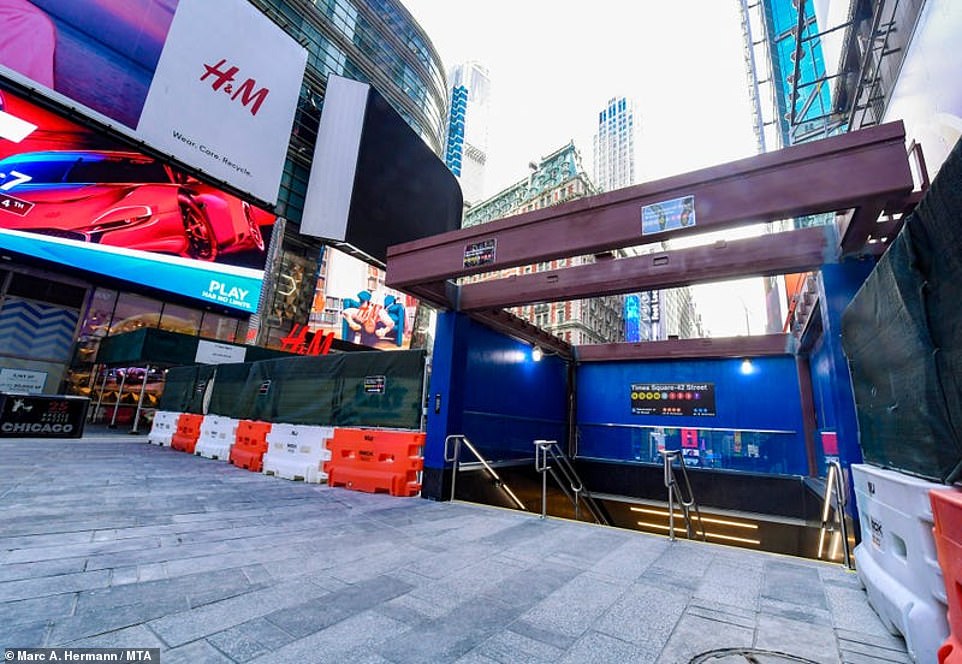 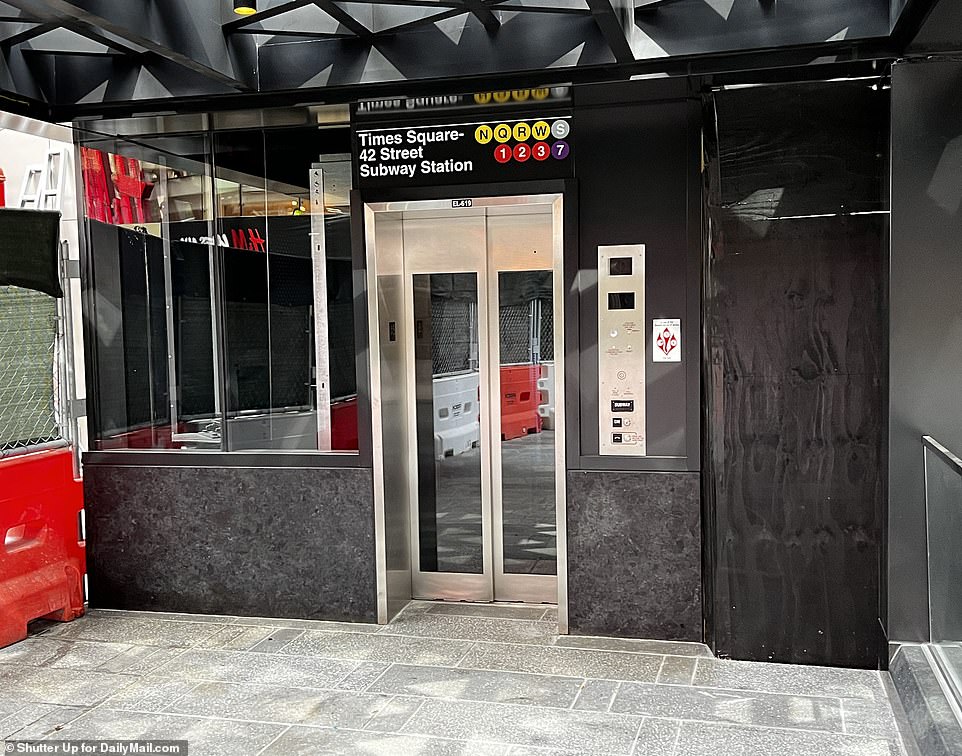 A new $10 million elevator was also built into the station, connecting commuters from outside the station to the mezzanine or even platform levels

Also in February, a man upset that his sexual advances had been rebuffed on a Bronx subway platform, defecated in a plastic bag then smeared it on the head and face of the woman he had hit on.

Later in March, in an echo of the attack on the city health worker, a 29-year-old Asian man was beaten with a hammer in a 14th Street subway.

On March 23, a 14-year-old boy was punched repeatedly by a gang of attackers at a Brooklyn train station. The teen was in the Van Siclen Avenue station in East New York when the gang unleashed a brutal series of head and body blows. Video of the attack show the youth try to protect himself against the violent mugging.

On April 5, a commuter on a northbound 4 train got into an argument with another man who slashed him in the neck with a boxcutter. A man had his neck slashed with a boxcutter on the subway on Tuesday morning in the latest frightening act of violence in New York City.

NYPD officials say the victim, in his forties, was traveling on a northbound 4 train when he and another man got into an argument.

On April 12, a rush-hour N train filled with smoke pulled into a Brooklyn station toward the 36th Street station in Sunset Park. Gunshots — at least 33 of them — rang out, wounding at least 10 people. 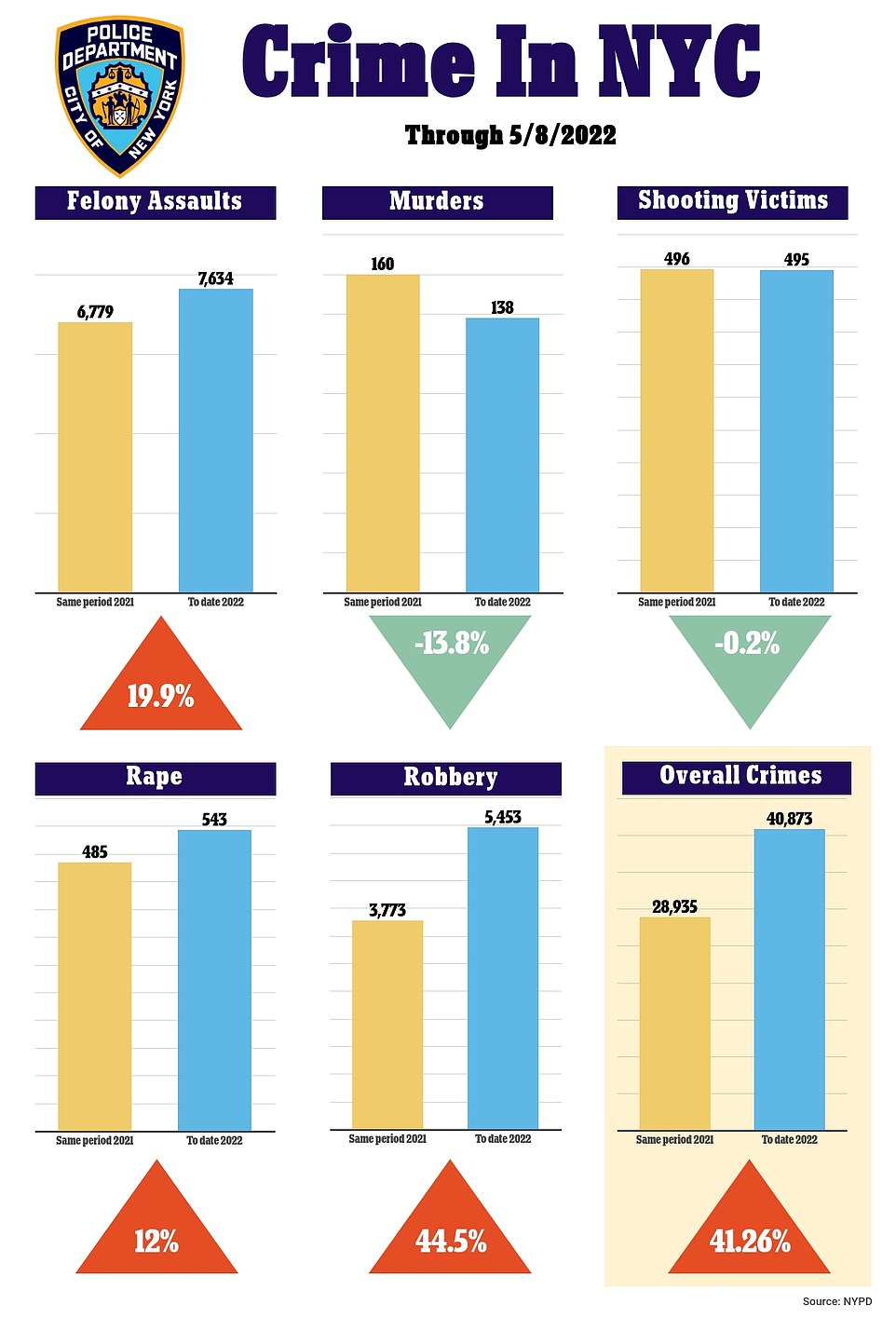 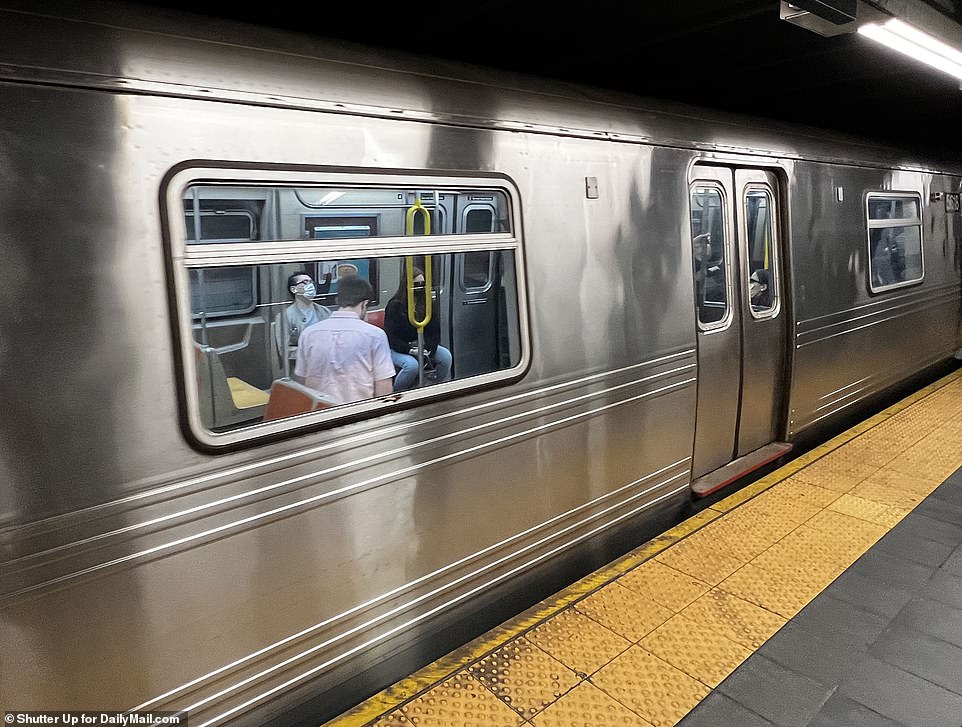 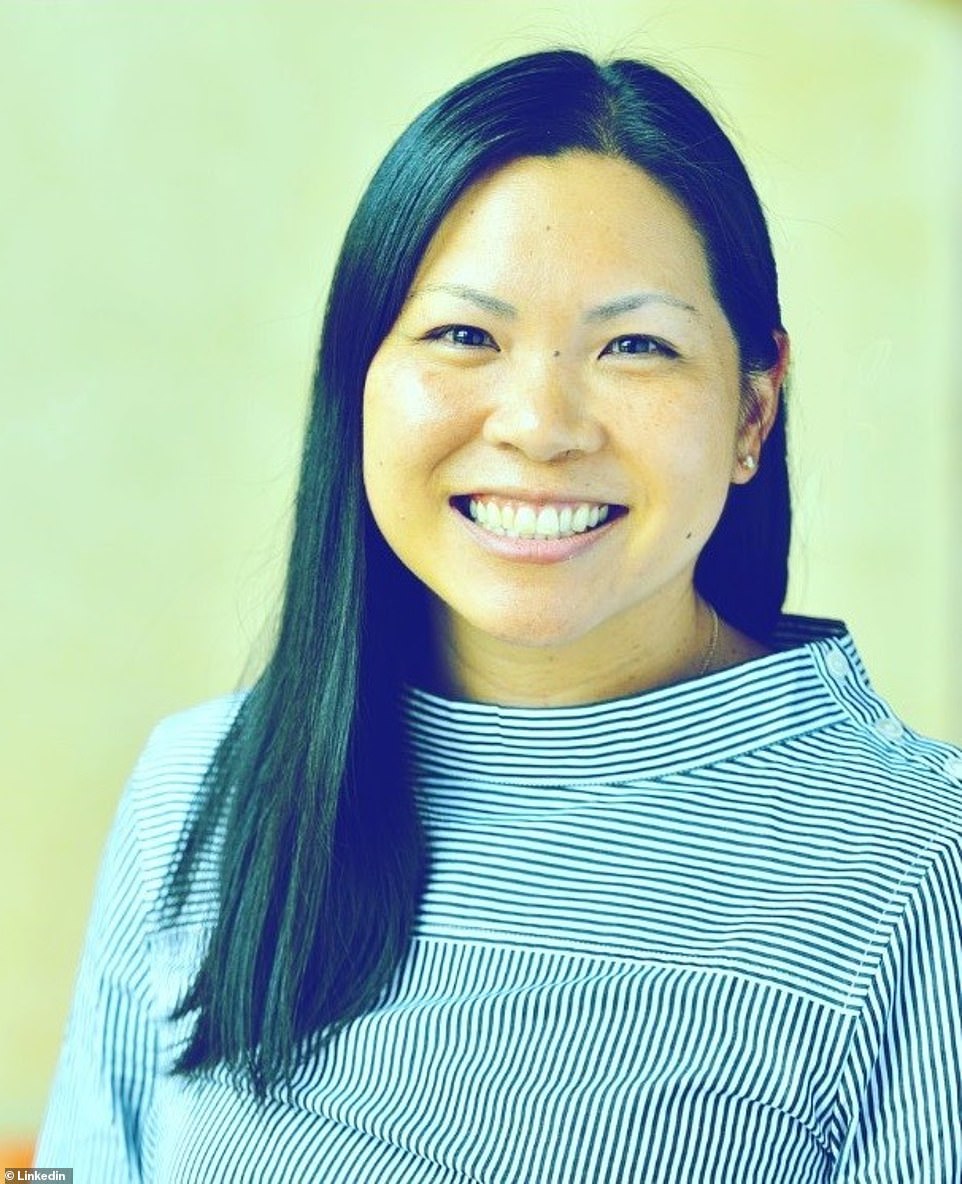 Prior to her death, Go (pictured) was an executive manager at Deloitte Consulting, according to her LinkedIn. Her death shocked New York City residents and prosecutors from the District Attorney’s office previously claimed that Simon was motivated by racial bias against Go, who was Asian American 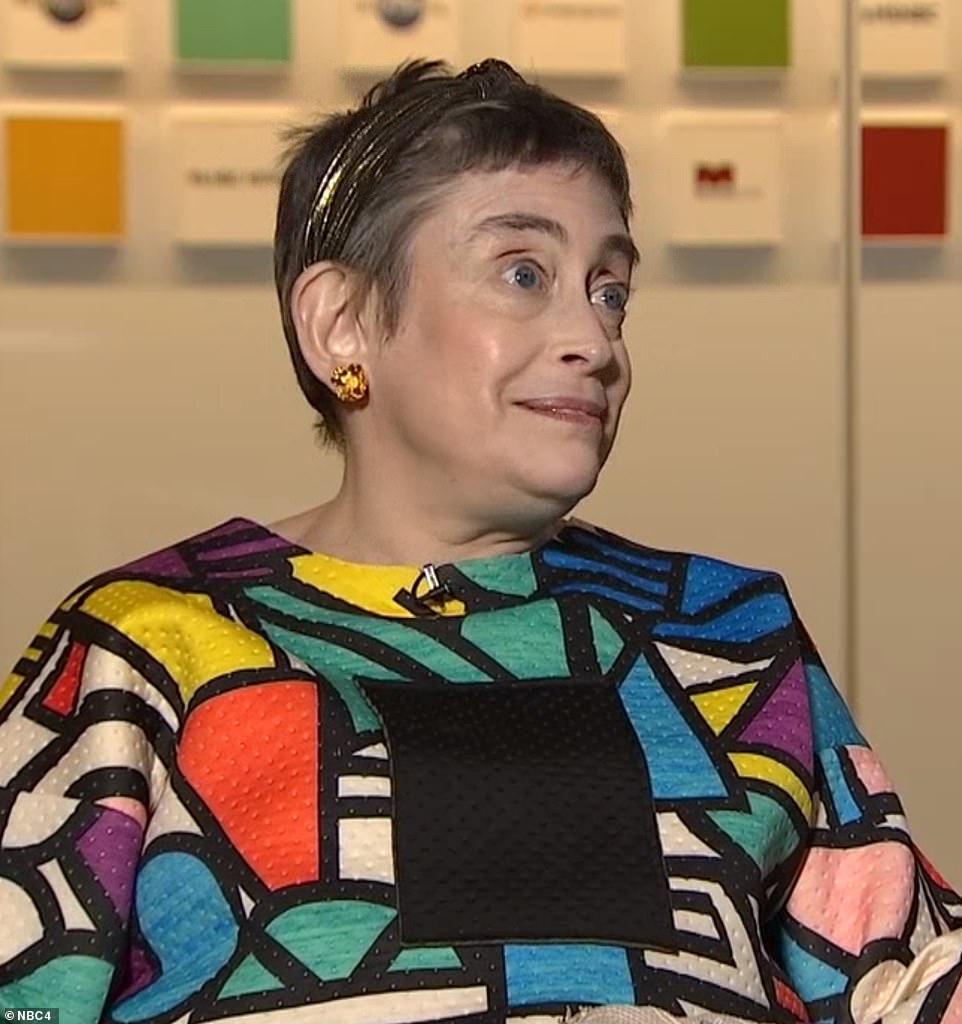 Nina Rothchild, 58, spoke out for the first time since she was pushed down a flight of stairs and hit in the head 13 times with a hammer at a subway station in Queens, New York, in February 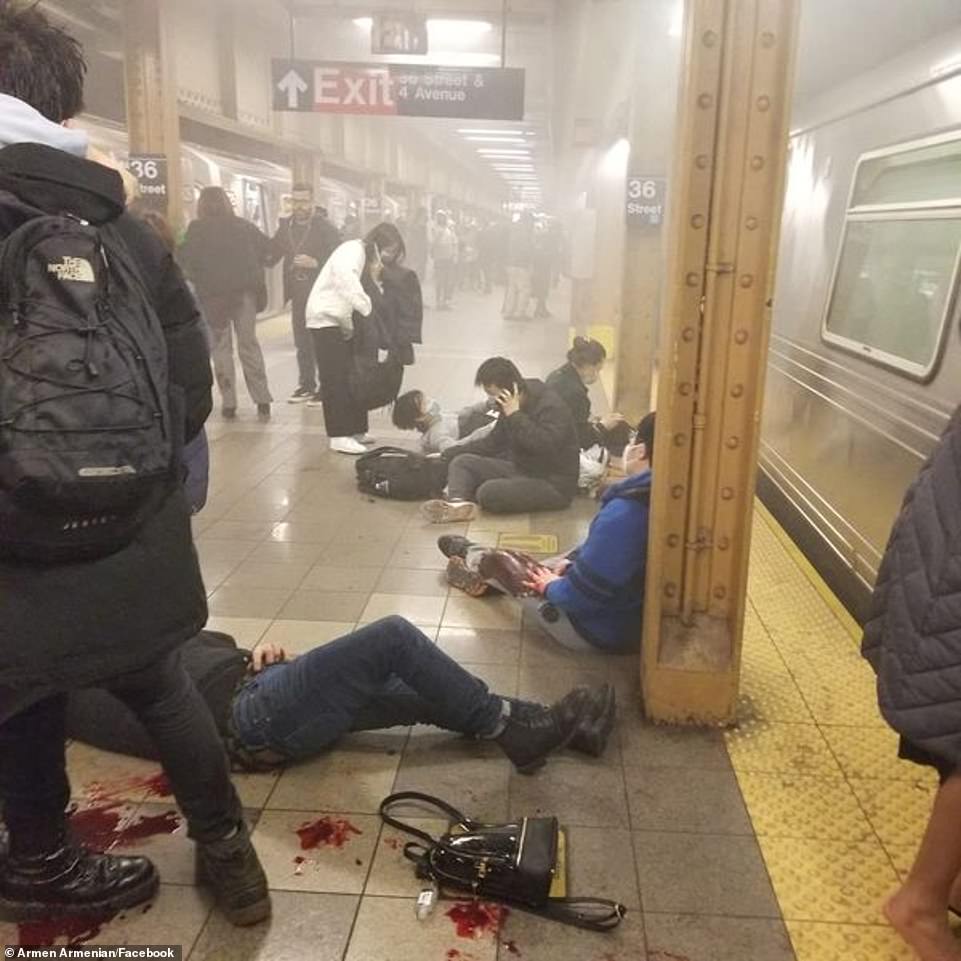 Pictured: The April 12 attack on the 36 Street station in Brooklyn, where the gunman managed to escape without trace after setting off smoke grenades and firing a barrage of bullets at trapped passengers before being captured days later. Pictured: People lay injured on the subway platform 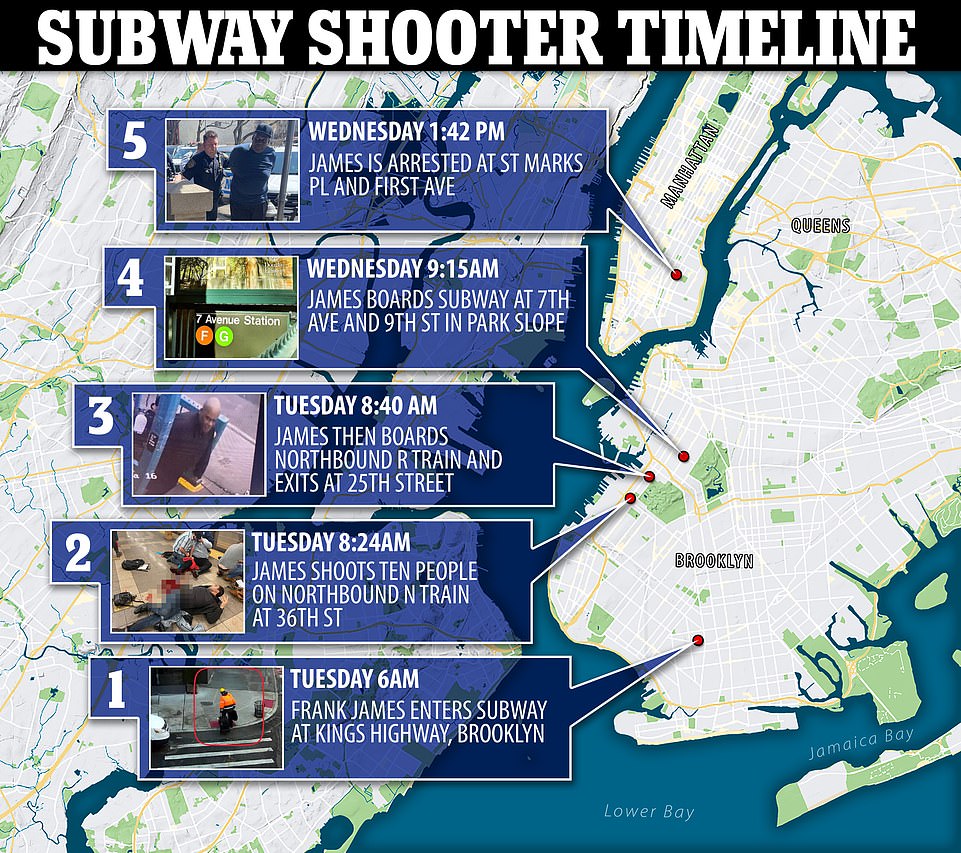 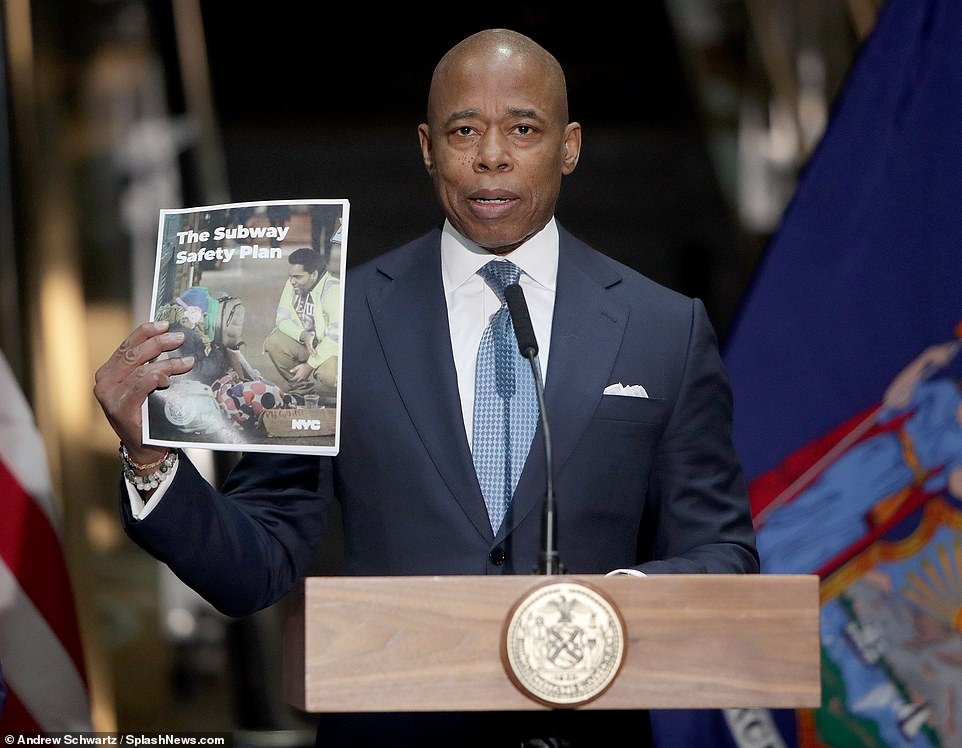 Police and security officials have repeatedly made many attempts to harden the city against such attacks since the start of the year, reinforcing the number of officers on trains and platforms, installing surveillance cameras and even doing occasional spot checks for weapons on passengers entering some stations.

Yet the sprawling system largely remains like the city streets themselves: too big to guard and too busy to completely secure.

Public officials say the subway system is crucial to the city’s recovery from the coronavirus pandemic, which saw many New Yorkers avoiding mass transit during its peak.

Governor Kathy Hochul posted a photo on social media showing her riding a train after the shooting on April 12, and Mayor Eric Adams pledged to increase patrols in subway stations.

‘We know that this hurts the mindset of many New Yorkers who are afraid of what happened, but we’re a resilient city. We’ve been here before,’ Adams told MSNBC on April 13, a day after the attack. 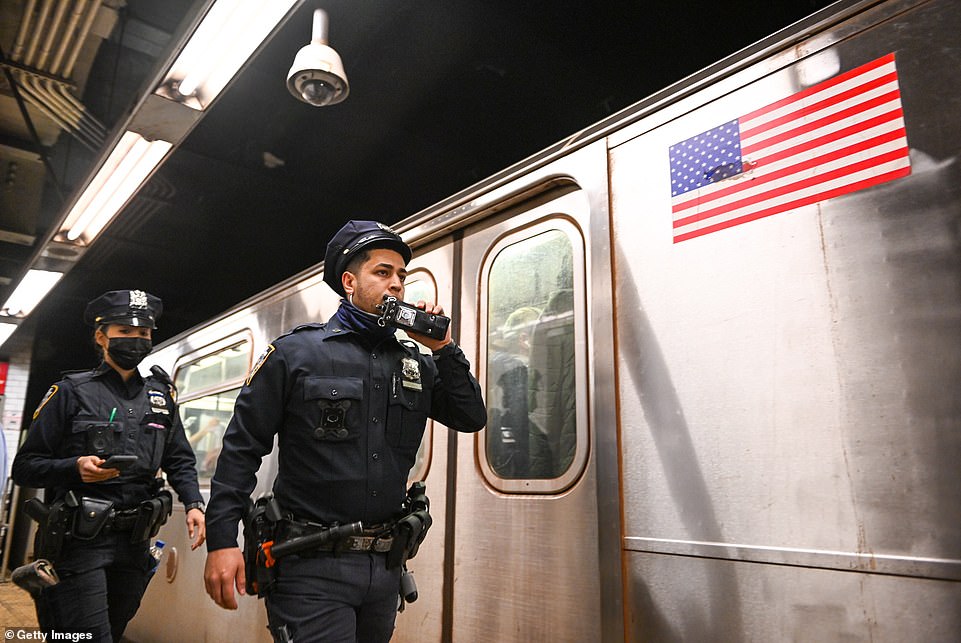 MANHATTAN: Subways across the country have seen an increase in policemen since the April 12 although many New Yorkers are advocating for more safety

Even before the attack, the mayor had vowed to increase subway patrols and launch sweeps of subway stations and trains to remove homeless people using them as shelters.

In the 1980s, New York City’s subways were a symbol of urban disorder: graffiti-covered, crime-plagued and shunned by tourists.

Like the rest of the city, though, the subways have since cleaned up their act. Before COVID-19 hit, the main problem with the trains wasn’t crime but overcrowding and breakdowns related to aging infrastructure.

After the September 11 terror attacks, New Yorkers learned to live with the worry that the subways or other parts of the city could be a terror target.

In 2017, an Islamic State group sympathizer detonated a pipe bomb strapped to his chest in a subway station near the Port Authority Bus Terminal, injuring several bystanders.

That same year, the city began expanding the use of vehicle-blocking sidewalk barriers after two attacks. In one, a man who prosecutors said was also supportive of IS drove a rented truck down a bicycle path along the Hudson River, killing eight people and maiming others. In another, a psychologically disturbed man drove a car at high speed into pedestrians in Times Square, killing one and injuring at least 20.

In 2016, a man who prosecutors said sympathized with Osama bin Laden set off homemade bombs in Manhattan and New Jersey, injuring some bystanders, before being captured in a shootout with police. And in 2010, a man tried to set off a car bomb in Times Square, only to have it fizzle.

What has the MTA invested in over the years? How much has it all cost?

The MTA has a long past of spending a good chunk of its budgets towards busier subway stations than others, creating inequity between stops.

The agency spends a lot more on construction projects than any other transit systems in the world, according to a study from researchers at New York University that was first reported by New York Daily News.

The 1.6-mile expansion of the subway station on Second Avenue in East Harlem is set to reach 125th Street for an expected $6.3billion.

That’s roughly $1.95 billion per 0.8-mile, making the project the most expensive expansion in any large metropolitain in the world.

In 2019, it was revealed by the New York Daily News that one in five MTA construction project are run over budget, supposedly 20 percent.

Last year, a $300 million project was allocated to provide a redo for the platforms on Time Square and 42nd Street and make them accessible by wheelchair.

The money also went towards design mosaic in the tunnel between Time Square and Bryant Park.

In 2016, the MTA spent $72 million on the ‘Enhanced Station Initiative,’ founded by scandal-ridden and former Governor Andrew Cuomo.

The program allowed stations to close for several days, if not weeks, in order to receive a makeover.

During the pandemic the MTA received $769million in funding from the Biden Administration’s American Rescue Plan. Governor Kathy Hochul even called the hefty stipend a ‘victory.’

Demand for adjustable-rate mortgages is growing as interest rates jump

Microsoft SQL Server has been targeted by ransomware