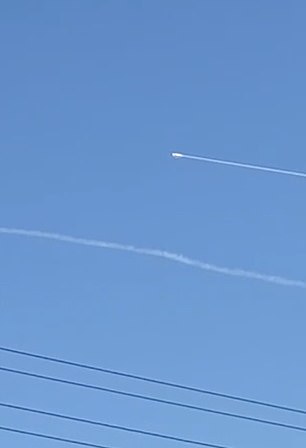 This morning, the Ukrainian capital was virtually without water and electricity after Russia launched another missile attack on major cities.

Vitali Klitschko, the mayor of Kyiv, said 80% of his city was without water and 350,000 homes were without electricity after Russian cruise missiles hit key infrastructure sites – with witnesses reporting five explosions.

Also affected were Kharkiv in the north, Dnipro and Cherkasy in central Ukraine, as well as the city of Zaporozhye in the south of the country, which led to blackouts.

Russian strategic bombers fired more than 50 cruise missiles, 44 of which were shot down, the Kiev command reported.

It came two days after the Russian Black Sea Fleet was damaged by drones carrying explosives in an attack blamed on Ukraine. 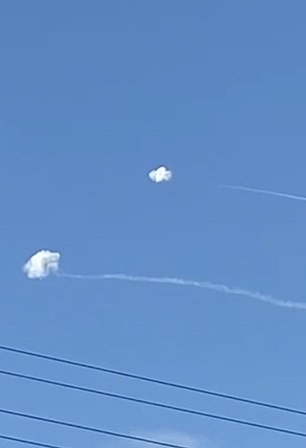 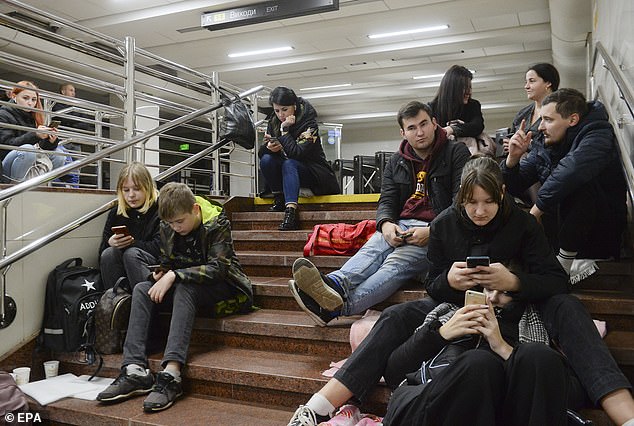 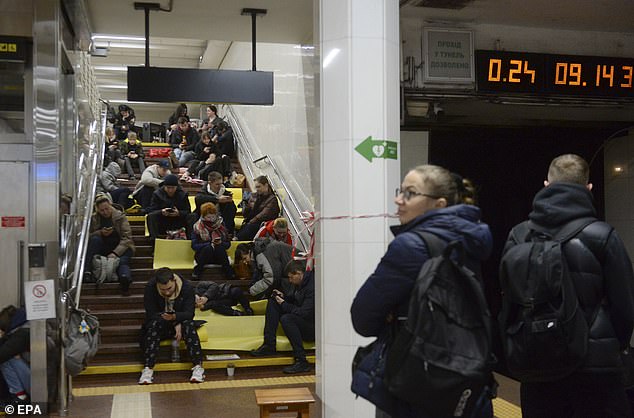 At least five explosions were heard in Kiev on Monday, when Russia launched new missiles at electricity facilities (pictured, people hide in the subway system) 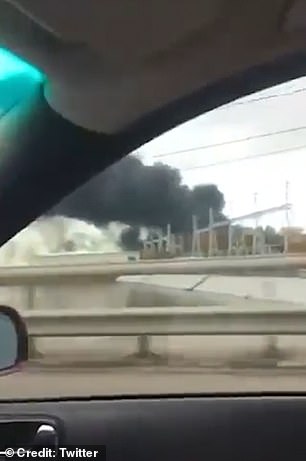 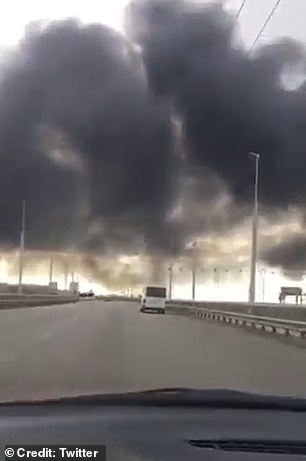 The governor of the Kyiv region, Alyaksei Kuleba, also said that as a result of the morning attack, one person was injured and several houses were damaged.

In Kharkiv, there were two strikes on critical, in the opinion of the authorities, infrastructure facilities, the subway stopped working.

Officials also warned about possible power outages in the city of Zaporizhzhia due to strikes there.

Critical infrastructure facilities in the Cherkasy region were also affected, and there were explosions in other regions as well.

In the Kirovohrad region of central Ukraine, an attack was made on an energy facility, local authorities reported.

In Vinnytsia, a downed rocket fell on civilian buildings, there were no casualties, the governor of the region, Siarhei Borzov, said.

Parts of the country’s railway network were also cut off, Ukrainian Railways reports.

Russia is striking civilian infrastructure, including electricity and water supplies, in an apparent attempt to freeze Ukrainians in their homes as winter approaches.

Faced with setbacks on the battlefield, Moscow appears to be targeting civilians to break their will to continue the war. Such attacks are war crimes under international law.

This followed a weekend in which Russia accused Ukraine of a drone attack on its Black Sea Fleet.

Since then, Moscow has refused to support ships that take grain from Ukraine’s ports to world markets, saying it “can no longer guarantee their safety.” 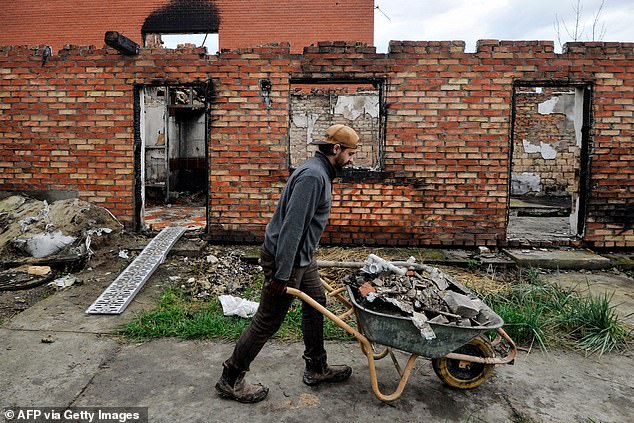 A volunteer sorts through the rubble of a house destroyed by shelling in the village of Moschun, Kyiv region 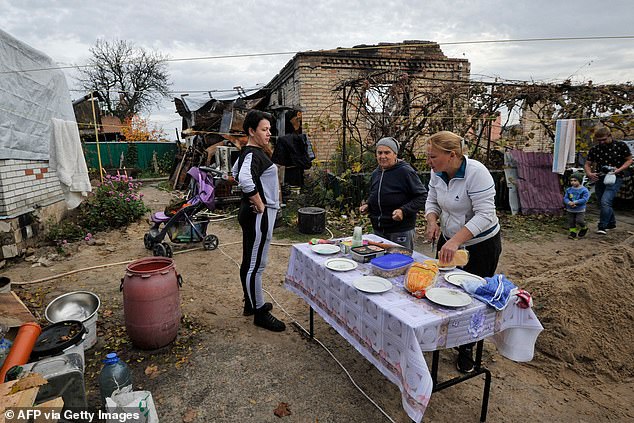 Women set the dinner table near a house destroyed by shelling in the village of Gorenko, Kyiv region 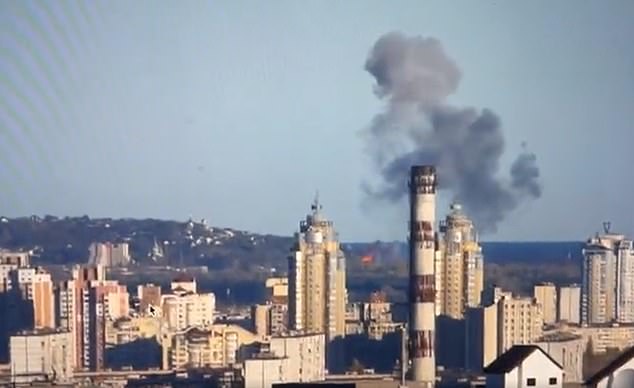 Russia has been stepping up attacks on Ukraine’s power grids in recent weeks as Putin’s forces face a pushback on the battlefield (File photo, smoke over Kiev) 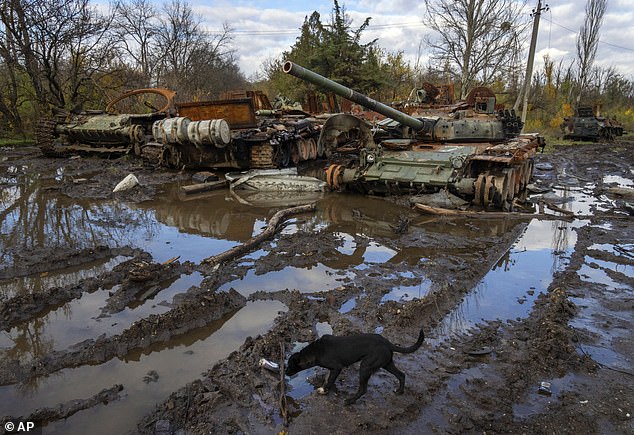 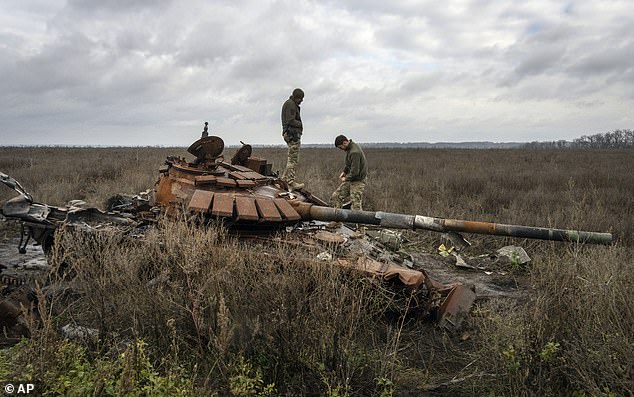 Over the weekend, Ukrainian soldiers inspect a knocked-out Russian tank in the Kharkiv region

The Minister of Foreign Affairs of Ukraine Dmitrii Kuleba added: “Another batch of Russian missiles is hitting the critical infrastructure of Ukraine.

“Instead of fighting on the battlefield, Russia is fighting with civilians.

“Don’t justify these attacks by calling them a ‘response.’ Russia is doing this because it still has missiles and the desire to kill Ukrainians.”

Russia said that nine drones took part in the attack on the Crimean port of Sevastopol on Saturday, which damaged one military ship.

Footage released over the weekend appeared to show the attack from the drone’s perspective – zooming in on the warship as the helicopter attempted to blow up the drone.

Another piece of black and white footage appeared to show the moment the ship was struck, with an explosion lighting up the night sky.

Moscow claimed all the ships hit were on a mission to allow grain ships to navigate the heavily mined waters of the Black Sea and transport food to global markets where it is used to feed some of the world’s poorest.

As a result, the Kremlin said it was withdrawing support for the mission.

However, Kyiv – with the support of Turkey – plans to push forward with new supplies today amid fears that the vessels could come under attack. 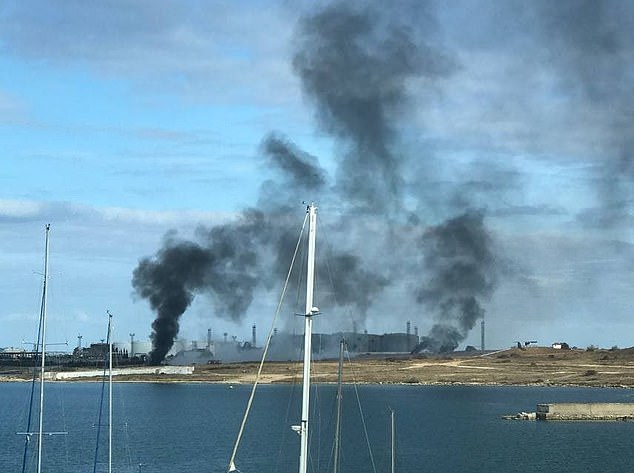 Without permitting reform, the path to clean energy may face a detour