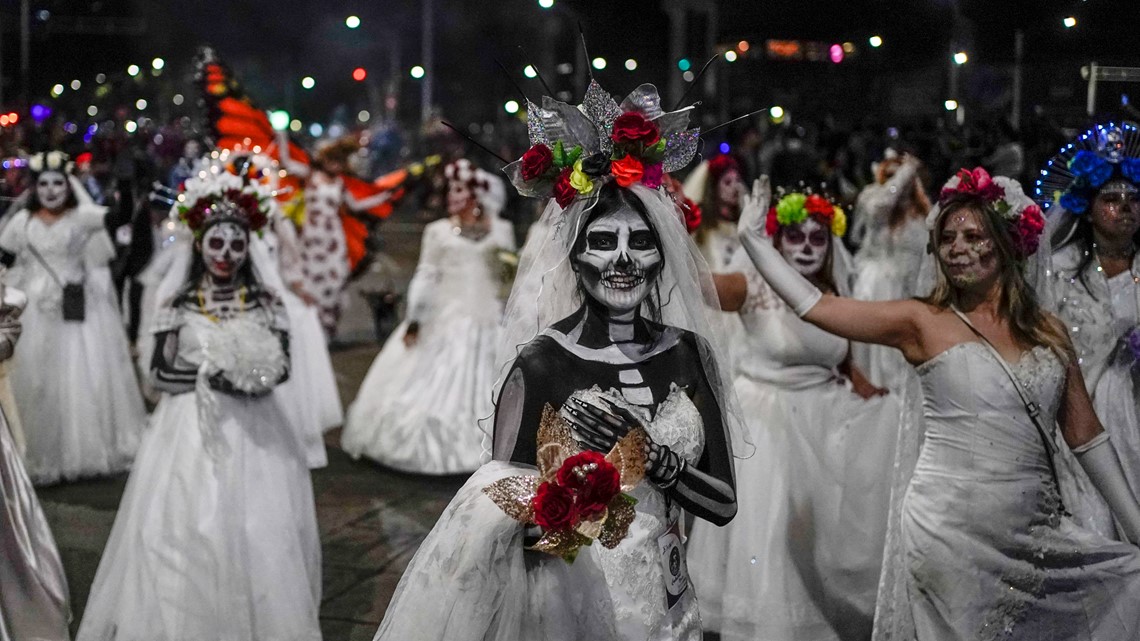 Marigolds decorate the streets, and music plays from speakers. Both adults and children dress up as skeletons and take pictures. Here’s what you need to know.

MEXICO CITY, Mexico — During Mexico’s Day of the Dead celebrations in late October and early November, the living remember and honor their dearly departed, but with celebration, not sorrow.

Marigolds decorate the streets, and music plays from speakers. Adults and children alike dress up as skeletons and take photos capturing the joy-filled annual festivities. It is believed that during the Day of the Dead – or Dia de Muertos – they can communicate with their deceased loved ones.

No one knows when the first celebration took place, but it is rooted in beliefs related to agriculture in pre-Hispanic Mexico, said Andres Medina, a researcher at the Institute of Anthropological Studies at the National Autonomous University of Mexico. Catholic traditions were incorporated into the celebration after the Spanish conquest in 1521.

“In this mythology, corn is buried after planting and lives underground for a while, only to re-emerge as a plant,” Medina said. A grain of corn is seen as a seed, comparable to a bone, which is seen as the beginning of life.

Today, skeletons are central to Day of the Dead celebrations, symbolizing the return of bones to the world of the living. Like seeds planted under the soil, the dead temporarily disappear, only to return each year as the annual harvest.

Altars are also the core of preservation. Families place pictures of their ancestors on their home altars, which include paper cut ornaments and candles. They are also decorated with offerings of items once loved by those now gone. It could be cigars, a bottle of mezcal or a plate of mole, tortillas and chocolate.

Traditional altars can be decorated with a pattern that represents the Mesoamerican belief that the world has levels, Medina said. But not everyone follows – or knows – this method.

The way Mexicans celebrate Day of the Dead continues to evolve.

It is typically an intimate family tradition, performed with home altars and visits to local cemeteries to decorate graves with flowers and sugar skulls. They bring the favorite foods of their deceased loved ones and hire musicians to play their favorite songs.

“Nowadays, the celebration is influenced by the American Halloween,” said Medina. — These elements take on a new meaning in the context of the original meaning of the festival, which is to celebrate the dead. Celebrations of life.”

OTHER NEWS: ‘It’s got to be profitable’: Why Halloween candy wrappers are hard to recycle

In 2016, the government started a popular annual parade in Mexico City that culminates in the main square with altars built by artisans from all over the country. An approximately three-hour event featuring one of the holiday’s most iconic characters, Katrina. The female skeleton is dressed in elegant clothing inspired by prints by José Guadalupe Pasado, a Mexican artist who painted satirical caricatures in the early 20th century.

On Friday afternoon in the capital, Paola Valencia, 30, walked through the main square looking at some of the altars and explained her gratitude for the holiday: “I love this tradition because it reminds me that they (the dead) are still among us”.

Originally from the Mexican state of Oaxaca, she said residents of her hometown, Santa Cruz Xaxacotlan, spend a lot of time each year building large altars. They are a source of pride for the entire community.

“Sometimes I want to cry. Our altars represent who we are. We are very traditional and we like to feel that they (the dead) will be with us at least once a year,” she said.

Russia’s Rusal files lawsuit in London against Patanin over Nornickel – One America News...

The new head of the British Treasury seeks to calm the markets with his...

McClanahan won the 5th start in a row, Reyes won 3 of the cards