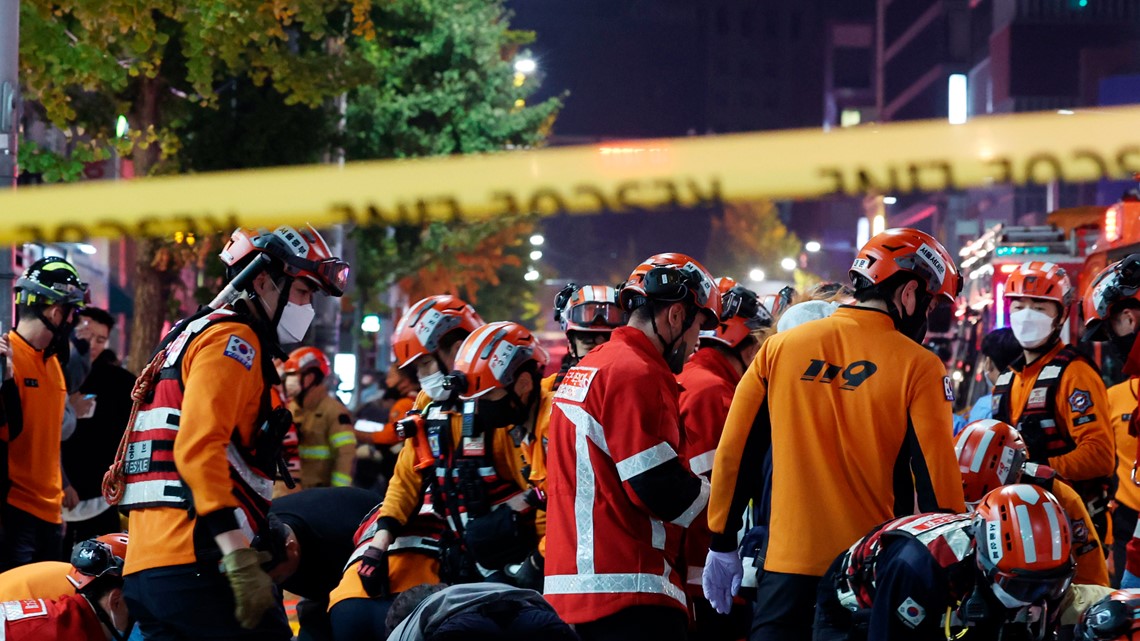 Police said the victims were crushed by a large crowd moving down a narrow street during Halloween celebrations.

SEOUL, South Korea – At least nine people were killed and dozens injured after they were crushed by a large crowd advancing on a narrow street during Halloween celebrations in the capital Seoul, South Korean officials said.

National Fire Agency spokesman Choi Cheong-sik said at least 60 more people were being treated for injuries and that the death toll could rise. Officials say people were believed to have been crushed to death after a large crowd began pushing forward in a narrow alley outside the Hamilton Hotel, Seoul’s main party spot.

THIS IS BREAKING NEWS. Earlier AP history is below.

About 100 people were injured and an unknown number believed to be dead after they were crushed by a large crowd advancing on a narrow street during Halloween celebrations in the capital Seoul, South Korean officials said.

National Fire Agency spokesman Choi Cheong-sik said about 100 people were injured in the Saturday night stampede in the Itaewon recreation area, and about 50 were being treated for cardiac arrest early Sunday.

Choi said people were believed to have been crushed to death after a large crowd began pushing forward in a narrow alley outside the Hamilton Hotel, Seoul’s main party spot.

He said more than 400 ambulance personnel and 140 vehicles from across the country, including all available personnel in Seoul, were deployed on the streets to treat victims.

Officials did not immediately release the death toll, as they usually do not until deaths are confirmed at hospitals. A separate statement from the National Fire Agency said officials were still trying to determine the exact number of emergency patients.

Television footage and photos from the scene showed ambulances lined the streets amid a heavy police presence and paramedics carrying the injured on stretchers. Emergency personnel and pedestrians were also seen performing CPR on people lying on the streets. Several people, apparently among the injured, were seen covered with yellow blankets.

Police also confirmed that dozens of people were given CPR on the streets of Itaewon, while many others were taken to nearby hospitals.

A local police officer said he was also told there was a stampede on the streets of Itaewon, where crowds of people had gathered for Halloween. The officer spoke on condition of anonymity, saying the details of the incident were still being investigated.

Earlier, some local media reported that the crash occurred after a large number of people rushed to the Itaewon bar after hearing that an unknown celebrity had visited.

South Korean President Yoon Suk-yeol issued a statement calling on officials to provide emergency aid to victims and review security at holiday venues. He also instructed the Ministry of Health to quickly deploy medical teams and provide beds in a nearby hospital to treat the injured.

Local media reported that around 100,000 people gathered on the streets of Itaewon for Halloween celebrations, the biggest in years since the easing of COVID-19 restrictions in recent months.

NASA has completed a historic rocket launch in the Australian outback

Homeport improvement: Tim Allen pays for cleanup after 30 gallons of diesel spill from...