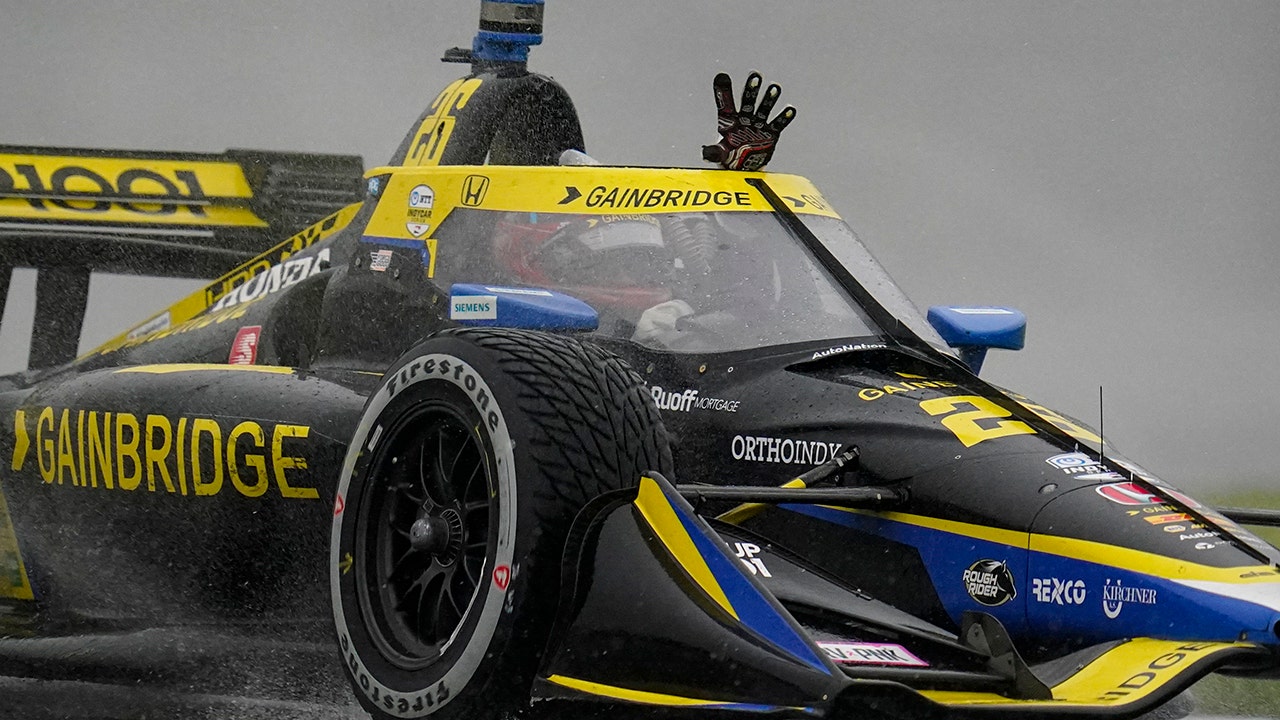 When Colton Hertha set up his winning pass on Saturday, all he could see were red flashing lights. He still rushed forward.

The 22-year-old California driver quickly dashed inside Pat O’Ward on a late restart, forever leading nine laps ahead of the finish line and bypassing Simon Pagno to the finish line by 3.0983 seconds to win the wild, silly, wet IndyCar Grand Prix.

“Pure talent,” Herta joked when asked how he endured his first win of the season despite the incredibly difficult weather. “The most interesting thing is that you never have a car that does great on wet and dry, but it happened today.”

Getting to the winning track, of course, was not easy for Hertha, who got her first victory in India in her 10th series, which started on the track. He also became the first Honda driver to reach the winning lane this season.

But on Saturday he made all the right calls.

After finishing 14th in qualifying in a network of 27 cars he made the bold choice to switch from rain tires to dry tires in just three laps in the race. While initially he struggled to keep cold tires on the track and nearly turned around on lap 4, when on the 10th turn on the 14th turn on the 2.439 mile track he strayed to the side, Hertha never shuddered.

Somehow he got stuck, quickly taking the lead and taking advantage of a move that allowed him to move from 15th to first. The rest of the race he remained near the front, leading 50 of 75 laps in a two-hour race that had just 53 minutes 22 seconds of green flag time.

Hertha is ranked sixth in the IndyCar standings.
(AP)

It happened during the day, strategists and racers were constantly changing plans due to rain or the threat of rain. And even if it turned out that Hertha had made the wrong choice – for example, running on dry tires after Alexander Rossi and early switched back to rain tires – it worked.

“I said it’s probably a wet track now, but if you think it’s going to be dry, we’ll go for the slick,” Herta said, referring to the first of two late pit stops. “As soon as I got out of there, I knew it was going to be hard, so we came back. Fortunately, everyone followed us and made sure we didn’t lose too many seats. “

Paige and the winner of the pole, Will Power, had a hard time sorting out the spray coming from other cars. None of them could see well enough for a long time in the first IndyCar rain race with air screens to catch Hertha.

However, the two three-time race winners and former teammates felt they had also achieved something. Pozna, the French racer, gave Meyer Shank Racing the best finish of the season.

“It was crazy. The race was phenomenal and strategy was the name of today’s game,” he said. “Sometimes a second feels like a win. I’d like to win tonight, but we’ll probably celebrate tonight as it was a win.”

Coltan Hertha has seven wins in his IndyCar career
(AP)

Power played for the points of the champion of the series, who defends Alex Palu, and published the best result of the team Penske.

“After all, you couldn’t see. I can’t imagine going back to the 10th or anything,” the Australian said. “Pretty crazy day to keep you in shape and if you choose the right tire and don’t overdo it. Just survival.”

The race organizers knew the weather would be a factor.

They postponed the start time to about 30 minutes hoping for a wet track. Instead, the start was postponed – first due to the approach of lightning in the area, and then due to the constant light rain.

The colder, damper track changed everything. There were steep accidents, even cars with difficulty kept in line in the alert. And no one, not even the main names of the series, were insured.

The Penske team tried to get two-time series champion Josef Newgarden back on the track after his car was damaged in a crash on lap 17. Power lost three places in the first lap and never recovered completely, and Scott McLaughlin, Penske’s third driver, lost the lead when spinning under caution.

Six-time series champion Scott Dixon, a New Zealander who supports Chip Ganassi Racing, ran out of fuel for the pit lane. Dixon’s partner, Palu from Spain, dropped out of the fight when he, like Rossi, returned too early to the rain tires.

O’Ward and teammate Arrow at McLaren SP Felix Rosenquist got entangled in the first turn of the 42nd lap.

“I knew we could do it,” Herta said. “Did I think we would win today in a regular dry race? No, probably not. But we adapted pretty well. It was a lot of fun.”

Teams and drivers will not go anywhere. Next is the race series, Indianapolis 500 on May 29th. Everyone gets a two-day break until the trail transforms from a road trail to a more traditional oval. Training starts on Tuesday, and two qualifying days are scheduled for next weekend.