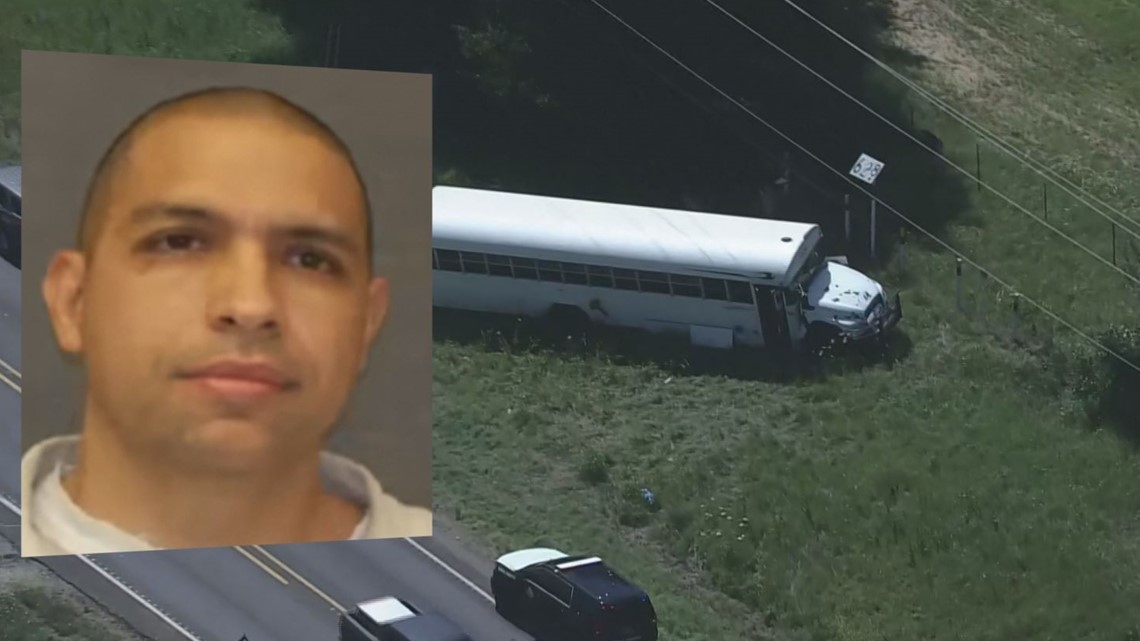 Authorities asked people in the area to report if they saw anything or anyone suspicious.

CENTRWILLE, TX – 10:30 p.m. – Centerville ISD canceled the school on Friday, May 13 due to a lengthy search for a runaway prisoner. If you live west of I-45, the Leon County Sheriff’s Office asks you to hide in place and stay inside.


10:05 p.m. – Authorities have released the names of employees who were on the bus during the accident and escape.

Randy Smith and Jimmy Bringer are expected to be fine. Lopez is accused of attacking Smith, who was driving the bus at the time. Smith received non-life-threatening arm injuries.

9 p.m. – TDCJ PIO Robert Hearst said Gonzalo Lopez is still on the run. Hearst said Lopez is dangerous and no one should try to take him into custody. If you see him, call the police immediately.

Hearst said authorities are asking the public to avoid the area from Centerville to Marquez and to Buffalo for the next 12-24 hours. Currently, Highway 7 is closed.

If you live in the area, close your cars, close the doors and report anything suspicious.

7 p.m. – Public Information Officer of the Texas Department of Criminal Justice Robert Hearst told more information about what happened before Lopez escaped from the bus.

Hearst said Lopez was taken to a reception in Huntsville, but did not specify what the reception was intended for. The bus was driving east on Highway 7 when Hearst said Lopez was somehow able to get out due to restrictions and hit the bus driver with a knife in the arm. Another guard was in the back of the bus, armed with a gun, but then Lopez tried to take control of the bus.

Lopez then smashed the bus, and then he managed to escape.

6 p.m. – Authorities continue to search for 46-year-old Gonzalo Lopez, who escaped from a prison bus near Centerville. Lopez is serving a life sentence for murder and attempted murder.

Authorities said Lopez stabbed a security guard and took control of the bus, and after a while crashed on Highway 7. He then fled to a nearby forest.

It is expected that the guard was all right, there were no life-threatening injuries.

16:45 – The TDCJ reported that Lopez attacked a security guard and stabbed them when he escaped after crashing a bus. The guard received non-life-threatening injuries and is expected to be fine.

15:30 – The escaped prisoner was identified as 46-year-old Gonzalo Lopez. Authorities said Lopez was last seen west on Highway 7 about 1.5 miles from I-45.

Lopez is serving a life sentence for a homicide outside Hidalgo County and an assassination attempt outside Webb County. Authorities said that if you see him, do not come and call the 911 service immediately.

15:00 – Public Information Officer of the Texas Department of Corrections Jason Clark said they are working to identify the escaped prisoner. According to Clark, the prisoner overcame the guard and took control of the bus. After a bus allegedly crashed on Highway 7, near Centerville, the inmate got off the bus and ran into a nearby forest.

Clark said there were other prisoners on the bus at the time, but no one got off the bus anymore. There are no victims at the moment.

14:30 – Leon County authorities are looking for a prisoner who has escaped from the Texas Department of Corrections. The prisoner allegedly stole a transport bus on Thursday afternoon.

Authorities said the inmate later crashed into a bus about two miles west of Centerville, near Highway 7 in Leon County. At this time, several agencies are being sought on the ground.

The Leon County Sheriff’s Office is asking people to keep an eye on anything suspicious and report if a person in a white TDC is seen in the community.

Additional information. We will keep you posted.

Synagogue worker is identified as second victim of Chicago July 4 massacre that killed...